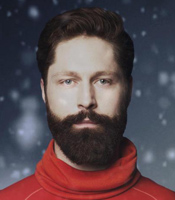 Jon-Allan Edward Butterworth represented Great Britain at the 2012 Summer Paralympics as a Team GB cyclist, earning three Silver medals. At the 2016 Summer Paralympics he finished in 4th place in the C4-5 1k Time trial and won Gold alongside Jody Cundy and Louis Rolfe in the C1-5 750m Team Sprint.

After leaving secondary school Jon-Allan Butterworth joined the RAF in 2002 and served in Afghanistan in 2005 and Iraq in 2007 as a SAC(T) Weapons Technician. On 4 August 2007, he was injured in an insurgent rocket attack whilst serving at the Royal Air Force airbase in Basra, Iraq. He was operated on by doctors in a battlefield hospital who consequently carried out an above the elbow amputation of his left arm.

It was while recovering at the Defence Medical Rehabilitation Centre in October 2007 that Jon-Allan first made contact with British Cycling coaches. He attended a Paralympics GB talent ID day but did not follow this up as a “return to work” programme was put into action with the RAF, which he wanted to fully commit to.

Later in May 2008 he became involved with the Help for Heroes Big Battlefield Bike Ride, a 350 mile cycling challenge around the battlefields of Northern France to help raise funds to benefit other injured servicemen and women.

Inspired by this experience and watching athletes such as Sir Chris Hoy in the Beijing Olympic Games 2008 Jon-Allan Butterworth attended a selection weekend in Newport and was accepted onto the British Paracycling Programme in January 2009.

Following this, Jon-Allan decided that it was time he left the RAF, and focus his efforts on becoming an elite paracyclist. The RAF Association has helped to support Jon-Allan on this journey, a journey which has had many highlights. These include;

Despite cycling for only a few years, Jon-Allan Butterworth achieved a great deal, not only in cycling, but in overcoming and embracing new challenges in life since his tour in Iraq.

He continued to seek new challenges and, in 2015, during a break from cycling he joined the line-up of contestants for series two of Channel 4’s The Jump; becoming a finalist and breaking records on the show. He was the first above elbow-amputee to compete on a skeleton bobsled.

However, the lure of another Paralympic Games, in Rio, brought him back to the Great Britain Cycling Team at the end of 2015.

At the 2016 Para-cycling Track World Championships in Montichiari, Italy, he won silver in the kilo - his fourth world championships medal in that event - before teaming up with Cundy and Rolfe to win gold, beating China in the team sprint final in a new world record time of 49.230.

In Rio, at the 2016 Paralympics, he rode strongly and only just missed out on a medal to finish fourth in the kilo before joining Rolfe and Cundy for the team sprint. The trio qualified fastest, in a new world record time, to reach the gold medal ride against China.

Two years later, there was further success for him in Brazil, as he reunited with Cundy and Rolfe to take team sprint gold at the 2018 UCI Para-cycling Track World Championships in Rio de Janeiro.

Jon-Allan Butterworth also added silver in the 1km time trial - the fifth occasion in his career when he reached the podium in the kilo at the world championships. At the previous two world championships, he has been part of the Great Britain team which has won team sprint silver behind China.

Following losing his arm after an insurgent rocket attack in Iraq in 2007 whilst serving with the RAF, Jon-Allan Butterworth has worked extremely hard to achieve his titles, medals and records along with being a pioneer for breaking disabled people into new disciplines and sports.

He can create a bespoke inspirational speech inline with company or personal ethos, values and goals to help improve staff or employee motivation and morale.

Jon-Allan’s motivational speeches can be tailored to suit a wide range of audiences, from the classroom to the boardroom, and a whole manner of other conferences and events with timings to fit your needs.

How to book Jon-Allan Butterworth for your event