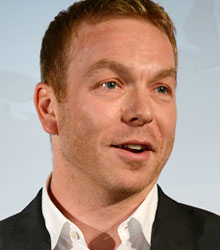 A true inspiration, Sir Chris Hoy is the first Briton since 1908 to win three gold medals in a single Olympic Games. He is the most successful Olympic male cyclist of all time and he is now in high demand as a keynote, after dinner and motivational speaker.

Sir Chris Hoy MBE, multiple world and Olympic champion track cyclist, was born and raised in Edinburgh and has been competing in various sports since the age of seven. He raced BMX until he was 14 years old, becoming Scottish Champion and ranking second in Britain and ninth in the world.

Chris also rowed and played rugby for his school, George Watson's College, throughout his teenage years. He rowed for Scotland as a junior, winning a British Championship silver medal in the Coxless Pairs.

As a senior, Chris Hoy turned his attention to track sprint cycling and in 1992 he joined his first cycling club in Dunedin. Two years later he joined The City of Edinburgh Racing Club, the most successful track club in Britain, and since 1996, the 36-year-old has been an integral member of the Great Britain National squad. He won his first world medal in 1999 - a silver in the Team Sprint – and has won 11 world and two Commonwealth titles to date.

Chris won his first Olympic gold medal in Athens 2004 in the Kilo - an event that was dropped from the programme for Beijing 2008. Chris took this in his stride and switched his focus to three other track sprint events – the Keirin, Sprint and Team Sprint. He went on to win a gold medal in all three at the Beijing Olympics, cementing his name in the history books.

Following his historic hat-trick of gold medals at the Beijing Olympics, Sir Chris Hoy was voted 2008 BBC Sports Personality of the Year. He was also awarded a Knighthood in the 2009 New Year Honours list, capping an extraordinary year for the track cyclist from Edinburgh.

In 2012 at his home Olympic Games in London, Chris won his fifth and sixth gold medals - in the Keirin and Team Sprint - becoming Great Britain's most successful Olympic athlete of all time with six gold medals and one silver.

Following his retirement, Chris remains passionate about bikes and has successfully made the transition into the business world following the launch of his bike range HOY Bikes, cycling accessories and clothing.

In 2016, Chris added to his record list of achievements when he finished the world's most demanding motorsport endurance race, the Le Mans 24 Hours, on his debut.

Chris has become a highly polished and in-demand public speaker and media presenter, who was a key part of the BBC TV's commentary and punditry team covering the 2016 Rio Olympics and 2014 Commonwealth Games in Glasgow.

Sir Chris Hoy is an accomplished and highly sought-after public speaker who is at home speaking to small intimate gatherings as well as at the largest international conferences.

Whether it’s delivering a motivational keynote address or a more light hearted and entertaining after dinner style presentation, Chris’ experiences and achievements make him an incredibly interesting speaker and the challenges presented to him and subsequently overcome during his stellar career have fascinating parallels in many other walks of life.

Marginal Gains In Business
In his highly motivational and engaging business speeches, Sir Chris Hoy talks through the ‘marginal gains’ strategy which he credits for much of his Olympic success. Based on the now-proven theory that marginally optimising every possible area for improvement will result in profound progress, it’s a strategy that can be translated to any business sector.

The World has changed for all of us. Sometimes change, no matter how difficult, can be a good thing. It forces us out of our comfort zones and presents new challenges which can allow us to develop and grow. Goalposts can move at any time, without warning and with only seconds to spare. As a sportsperson this is one of the first lessons you learn, and one of the most important.

Chris tells his story of change from Athens 2004 to Beijing 2008 when his goalposts weren’t just moved, they were taken away. He talks about the emotions he went through, how he learnt new techniques both physically and mentally, dealing with time away from his loved ones and transitioned with the forced change that then led to the biggest test of all.

Fantastic. In many years in the industry, I have rarely seen a crowd applaud and welcome someone in the way the crowd did. The crowd were engaged, excited and were very opened to asking some great questions.

Chris Hoy was thoroughly professional throughout the process, from planning to delivery. During the Q&A his content was highly engaging and motivational, this captured and maintained high levels of interest from our delegates who all left inspired. Chris was also incredibly patient and personable after the event with the ever growing line of guests waiting for photos!

Big thanks from Visa Europe for the appearance Sir Chris Hoy did for us today. He was truly inspiring!

Sir Chris Hoy delivered a speech that was inspiring, motivational and empowering to all who attended whether considered from a business, sporting or personal perspective. His demeanour throughout the event was very humble and engaging resulting in very positive feedback from our staff and customers alike.

We can’t tell you how fab he was! He is totally authentic, a thoroughly decent chap who wears his fantastic achievements very lightly, yet so generous to members of the public who want photos and autographs.

Sir Chris and his team were brilliant to work with and really delivered value for our client. Chris excelled at everything we asked him to do, from Q&As, to one-on-one conversations with senior business leaders, to filming. And his determination to cycle with each and every guest during our velodrome session made our client’s event really stand out. One of the best ambassadors we’ve worked with.

Chris Hoy played a central part in BP’s business receptions during the Glasgow 2014 Commonwealth Games. In his speaking role he generated an extraordinary level of respect and admiration from the audience, describing his incredible story with passion and energy. Chris communicates his perspective on life in an engaging, touching and humorous way; he unquestionably enhanced the Games-time experience of BP’s guests.

Feedback on Chris Hoy has been fantastic and our guests couldn’t get enough of him.

Clients often ask about purchasing books for giveaways and delegate packs. Below you’ll find a selection of products by Sir Chris Hoy MBE. Click the images to view on Amazon's website. For bulk orders, please speak with your Booking Agent.

How to book Sir Chris Hoy MBE for your event