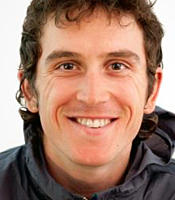 Geraint Thomas was born and bred in Birchgrove, Cardiff and attended Whitchurch High School. He started cycling at the age of 10 at Maindy Leisure Centre with the Maindy Flyers.

Geraint won numerous National Championships as an Under 14 and 16, however whilst training in Australia prior to a world cup, Geraint was involved in a bike accident and ruptured his spleen. He recovered quickly, and was back on his bike racing for the Academy.

Geraint turned professional in 2007 when he signed for the South African sponsored Barloworld. During this year Geraint Thomas participated in the Tour de France where he was the youngest rider. He was the first Welsh rider to ride the tour since Colin Lewis in 1967 and completed the tour, finishing 140th.

In 2008, still with Barloworld, Geraint went to the Beijing Olympics and won a Gold Medal in the Team Pursuit, breaking the world record twice on the way in a time of 3.53:314.

After Geraint's gold medal he was appointed a MBE in the 2009 New Year's Honors List. At the start of 2009 Geraint suffered a bad crash during the time Trail stage of Tirreno Adriatico. He misjudged a corner while descending a mountain pass, hit the safety barrier and fell 20 foot to the road below. He fractured his pelvis and broke wrist. This did not stop him however and he ended the year in style. During the Manchester World Cup, he set the fastest time under current rules in the 4 km individual pursuit, finishing in a time of 4 minutes and 15.105 seconds.

Geraint Thomas went on to win the gold medal in the event, with a comprehensive victory, catching his opponent in the final. On the final day of the world cup, Geraint was a member of the gold medal winning team pursuit, who set the second fastest time in history, and a track record of 3 minutes and 54.395 seconds in the process.

Geraint then went into his second Tour de France wearing the national championship stripes, which was the first time it was in the race since Sean Yates in 1992. He started with a bang, finishing 5th in the prologue, before moving to within 20 sec of the yellow jersey and 2nd overall after a 2nd place on one of the ‘queen stages' across the famous cobbles of north France. He wore the white jersey, for the best Under 26 rider, for 4 days. He ended his tour with 10th on stage 19s, 50km TT.

2012 began with the Tour Down Under, before his attentions turned firmly to the track and his second trip to Australia for the World Championships. Geraint Thomas chose to miss the Spring Classics in order to concentrate on the team pursuit. This decision proved to be worthwhile as the GB team beat the favourites, Australia, for the title in another new world record time.

Again, Geraint chose to miss another of his favourite races, the Tour de France, to concentrate on the Olympics. The GB quartet smashed their own team pursuit world record, set in the world championships, qualifying fastest in the Olympics. They strolled to victory against Denmark in the semi-finals, and in the much anticipated GB v Australia final, they dominated the race setting a new world record of 3.51.659, beating the Australians by almost 3 seconds. The five fastest team pursuit times ever ridden were all done by a team that contained Thomas.

2018 proved to be a fantastic year for Geraint, who won the Tour de France in July, was named BBC Sports Personality of the Year, and finished the year by being awarded an OBE in the New Year’s Honours list.

Clients often ask about purchasing books for giveaways and delegate packs. Below you’ll find a selection of products by Geraint Thomas OBE. Click the images to view on Amazon's website. For bulk orders, please speak with your Booking Agent.

How to book Geraint Thomas OBE for your event