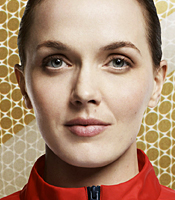 World and Olympic champion Victoria Pendleton began her cycling career on the grass track at the age of nine - an area where her father Max once specialised and held the title as national champion.

She was talent spotted by a national coach at the age of 16 but chose to focus on her studies rather than training full time. After school she went to Northumbria University and gained a degree in Sport and Exercise Science. However being a full-time student didn't stop Victoria wanting to compete. In 2001 she won four medals in the National Track Championships.

In 2007, Victoria made history when she won an unprecedented three world championship gold medals, establishing herself as the world's best female track cyclist. Her achievements were recognised further by winning "The Sunday Times Sportswoman of the Year" award as well as the "Sports Journalists' Association Sportswoman of the Year".

However her achievements in 2007 were topped by 2008's results when she won two gold medals and a silver medal at the World Championships then the ultimate prize in track cycling, the Olympic Gold medal for women's sprint in Beijing.

In the 2009 New Year's Honours list, Victoria Pendleton was awarded an MBE and in 2010 Victoria successfully defended her world champion title in the Sprint for the fourth year on the run.

Victoria regained her title as Sprint World Champion in 2012 after a close fought semi final match with Anna Meares of Australia, the very rider who had de-throned her a year earlier in Apeldoorn. And in London later that year she won Olympic Gold in the Keirin.

In Q&A interview sessions, Victoria Pendleton talks about the immense physical and psychological challenges faced by elite athletes, and the preparation and attitude needed to reach the very top of their game.

Clients often ask about purchasing books for giveaways and delegate packs. Below you’ll find a selection of products by Victoria Pendleton MBE. Click the images to view on Amazon's website. For bulk orders, please speak with your Booking Agent.

How to book Victoria Pendleton MBE for your event