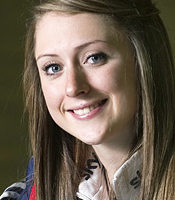 British track cyclist Laura Kenny has been a revelation since breaking into the British endurance squad and accumulated three world titles by the time she was 20.

As a junior, Laura won the Junior World Champion title in the Omnium, not to mention winning National titles in track, road and Time Trial racing. The then-18 year old was also selected to compete at elite level in the 2010 European Track Championships – the first event to qualify points for London 2012 – and won the Gold medal in the Team Pursuit alongside Wendy Houvenaghel and Katie Colclough. In 2010, she was also selected for England's Commonwealth Games squad in which she was the youngest member.

In 2012 Laura was part of the trio who not only broke the world record twice in the Team Pursuit in one day but retained the rainbow jersey for the second year running. Laura added another gold and world champion title to her growing collection in the Omnium, a few days later.

Laura Kenny’s Olympic debut proved just as successful, as she (along with Dani King and Joanna Roswell) won the Gold medal in the Team Pursuit, breaking the World Record a further three times in the process meaning the trio broke the record six consecutive times. Laura backed this up with another Gold in the Omnium where she once again pulled off the win in a crowd-pleasing Devil event.

Laura Kenny was born a month prematurely in Harlow, Essex with a collapsed lung and was later diagnosed with asthma. She was recommended by doctors to take up sport to regulate her breathing. She grew up in Cheshunt in Hertfordshire and first began cycling when her mother decided to take up the sport to lose weight, Laura and her sister joined their mother and Laura then became serious about the sport.

Laura was awarded a CBE in the 2017 New Year Honour’s list, for services to Cycling

How to book Dame Laura Kenny CBE for your event