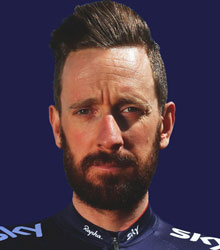 Bradley Wiggins is arguably an outstanding star in British sport and world cycling today with an exceptional record and his win in the Tour de France being described by Sir Chris Hoy as the “greatest sporting achievement” by a British athlete. Bradley has also enjoyed victories in Paris-Nice, the Tour de Romandie and the Criterium du Dauphine in 2012 - a feat never achieved by a cyclist before in the same year as a Tour de France victory.

Among his many accomplishments, Bradley Wiggins holds two notable achievements: he is the only person to have won the Tour de France and an Olympic gold medal in the same year and the only person to have won a Grand Tour and a gold medal in Olympic track cycling. He has won seven Olympic medals, including four gold, the joint most of any British Olympian and the third most gold medals by a British Olympian, behind Sir Chris Hoy and Sir Steve Redgrave.

Awarded an OBE in 2005, a CBE in 2009 and then a Knighthood in 2013, Bradley Wiggins is an eloquent public speaker and accomplished writer with a best-selling autobiography ‘In Pursuit of Glory' and a critically acclaimed account of the 2010 Tour de France ‘On Tour'. Sky Atlantic even commissioned a documentary ‘Bradley Wiggins: Tour of Duty' to follow the epic year.

Bradley speaks fluent French through his participation with French cycling teams and he lived in France for a number of years. He is a well-known mod and owns a collection of classic scooters and guitars from the 1960s and 1970s.He is also a keen musician and guitarist.

Clients often ask about purchasing books for giveaways and delegate packs. Below you’ll find a selection of products by Sir Bradley Wiggins CBE. Click the images to view on Amazon's website. For bulk orders, please speak with your Booking Agent.

How to book Sir Bradley Wiggins CBE for your event