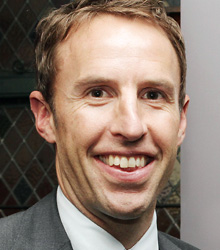 The first England manager to take the national team through to a major competition final in 55 years, Gareth Southgate has been Manager of the England football team since September 2016, when he replaced Sam Allardyce on a temporary basis.

After winning his first game 2-0 against Malta as caretaker Manager, followed by a draw against Slovenia, a win against Scotland, and a draw with Spain, he was officially appointed Manager on a 4-year contract in November that year.

In 2018, Southgate came under controversy ahead of the FIFA World Cup in Russia for his first eleven team selection, which included nine players making their World Cup debut appearance. It paid off, however, as he became the first England manager to reach the World Cup semi-finals since Sir Bobby Robson's side in 1990, 28 years previous, and only narrowly missing out on reaching the final; something England hasn’t achieved since they won the Cup in 1966.

Then, in July 2021, under Gareth Southgate’s leadership, the England team narrowly missed winning the final of the UEFA EURO 2020, losing by a margin of 3-2 to Italy during the penalty shoot-out. He was the first England manager to reach the final of a European Championship and, in fact, to reach any major tournament final since 1966.

Becoming Captain at each of the three clubs where he played, Gareth’s major honours were leading Palace to the Division 1 (now Championship) title in 1993/94 and winning the League Cup with Aston Villa in 1996 and with Middlesbrough in 2004. He was also an FA Cup runner-up with Villa in 2000 and losing finalist with Middlesbrough in the 2006 UEFA Cup, his final game as a professional in 2006, aged 35.

He was then appointed manager of Middlesbrough and managed them for 3 years from 2006-2009 in the Premier League before the club was relegated on the final day of the 2008/09 season. In October 2010 he was sacked as manager hours after a 2-0 victory over Derby with Middlesbrough one point off first place in The Championship.

Southgate is one of a select group to have won both the Barclay's Premier League Player and Manager of the Month Awards. Away from football Gareth Southgate's autobiography 'Woody and Nord' won the Sporting Club's 'Sports Book of The Year award in 2004.

In 2018, he received an OBE for services to sport and was awarded Coach of the Year at the BBC Sports Personality of the Year Awards. In 2019, he was awarded the Football Writers' Association Tribute Award.

Off the pitch, as a Goodwill Ambassador for The Prince's Trust, Gareth has supported the Trust's Future Leaders programme, which helps give young people skills in leadership and teamwork. For the FA, Gareth has authored the We Only Do Positive handbook, a resource for coaches and parents of young players highlighting the importance of positive values and behaviours such as fairness, integrity, inclusion and leadership.

In November 2020, he authored Anything is Possible: Inspirational Lessons From The England Manager, in which he tells the story of how he went from being a skinny, introverted teenager told he wouldn’t make it as a player to someone who played for and managed his country.

Gareth Southgate is arguably England’s greatest football manager for over half a century and an inspiration to all generations. The lessons, philosophy and wisdom he shares through motivational keynote talks and ‘in conversation with’ fireside chats has relevance for all of us, whether you’re in business or not and whether you’re a football fan or not; because fundamentally they are important core lessons and ideologies for life.

Southgate’s success as England manger can be attributed to many reasons, not least because he is an excellent communicator, humble, compassionate and speaks with authenticity — derived from his own personal experience, on the front line.

Discussing sections from his book, Anything is Possible: Inspirational Lessons From The England Manager, Gareth Southgate speaks about growth mindset and how to achieve success, turning failures into opportunities to learn and grow stronger.

He also discusses the importance of delegation and taking responsibility for your actions; not to being afraid to navigate your own path and, where necessary, making unpopular or controversial decisions for the greater good, and having the conviction to stand by those decisions.

He references his own childhood and the obstacles he had to overcome — telling the story of how he went from being a skinny, introverted teenager told he wouldn’t make it as a player to someone who played for and then managed his country. It’s a tale that, sadly, is all too familiar for many elite sports personalities who were told early in life they were the wrong height, weight, age or, even sex, to achieve their sporting dreams.

Yet, through sheer grit, determination, single mindedness and an unrivalled focus among their peers, they went on to accomplish their goals, and often, much more besides.

As a motivational leadership speaker, Gareth Southgate also talks about his three steps to achieving success...

BE BRAVE
Bravery is not just the kind of heroic act that earns a medal. It's the quality we need to step out of our comfort zones and take on new challenges.

BE KIND A force for good that comes from the heart, kindness changes lives. It opens up opportunities and can be our greatest strength.

FOLLOW YOUR DREAMS
We all have a story to tell in life. It's down to us what it will be about. So, let's begin writing your story - and make it one that truly shines.

Clients often ask about purchasing books for giveaways and delegate packs. Below you’ll find a selection of products by Gareth Southgate OBE. Click the images to view on Amazon's website. For bulk orders, please speak with your Booking Agent.

How to book Gareth Southgate OBE for your event