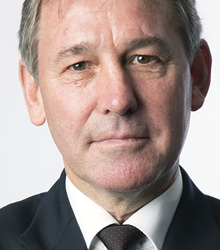 Bryan Robson has enjoyed a glittering playing career with both Manchester United and England, who is widely remembered as a fearless and inspirational player and captain, both for club and country, whose presence lifted team-mates and intimidated opponents. At his peak, he was acknowledged as the most complete midfield player in the country, and played at the highest level despite a series of devastating injuries.

Bryan Robson began his playing career as a trainee with West Bromwich Albion in 1974, holding position of midfield, before Ron Atkinson signed him for Manchester United in 1981, breaking the existing transfer record with a £1.5m deal. He went on to become the longest serving captain in the club's history and won two FA Premiership winners medals along the way. In 2011, he was voted as the greatest ever Manchester United player from a poll of ex Manchester United Players.

In the summer of 1975 he was called up to the England youth team for the "mini World Cup". He played as a centre-half and England won, beating Finland in the final. He was selected for the England Under-21s in 1977, but was withdrawn from the squad by West Brom, who needed him for a league match against Manchester United.

In 1979 he finally made his England under-21 debut, albeit as an overage player (he was 22 at the time), and in 1980 he made a full international debut with his first appearance at Wembley.

Bryan Robson represented England a total of 90 times, making him the sixth most capped England player of all-time, 65 of them as Captain. He took on a player/manager role at Middlesbrough in 1994 and eventually hung up his boots in 1997, taking the decision to move into management. By which time he'd made over 500 League appearances and scored 150 goals.

In his first foray into management Bryan Robson led Middlesbrough into the Premiership, securing promotion as Division One Champions. His tenure was characterised by a close relationship with Boro chairman Steve Gibson and a penchant for bringing in big money imports. Robson revived the fortunes of a once flagging club during his seven-year association with the Teesiders. At this time he was also building a career as a popular TV pundit.

He later returned to West Brom for two years as manager, helping them become the first top division team in 14 years to avoid relegation after being bottom of the league table on Christmas Day. He also had short spells as manager of Bradford City and Sheffield United, before being appointed manager of the Thailand national team in 2009. He resigned in 2011.

Bryan Robson was awarded the OBE in the 1990 New Year Honours. In 1998, he was named among the list of Football League 100 Legends and was made an Inaugural Inductee of the English Football Hall of Fame in 2002 in recognition of his impact on the English game as a player.

His autobiography “Robbo” reveals a fascinating insight into his days with the England and United camps and characters such as Paul Gascoigne, Gary Lineker, Roy Keane and Alex Ferguson. He puts the record straight on the 'drink culture' that Ferguson sought to stamp out at United, and describes his pain when he discovered he was surplus to the manager's requirements. He candidly reflects on the highs and lows of his football life, and discusses incidents on the pitch as well as some of the clashes that have happened behind the scenes.

Bryan Robson was top class – would highly recommend him to anyone thinking of him. Genuine and more than happy to talk about most things as well as a good laugh. Thanks very much for organising Bryan... we'll be looking for another speaker for next year so will be in touch later in the year.

Clients often ask about purchasing books for giveaways and delegate packs. Below you’ll find a selection of products by Bryan Robson CBE. Click the images to view on Amazon's website. For bulk orders, please speak with your Booking Agent.

How to book Bryan Robson CBE for your event