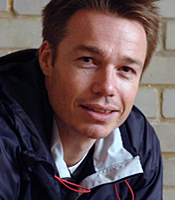 Graeme Le Saux is a former England international footballer who played most of his career as a left-back, though his football pace and skill enabled him to move into a left sided midfield role when required. Graeme made his England debut in a 1994 friendly against Denmark going on to represent his country 36 times. The highlight of his England career was representing his country in the 1998 football World Cup.

Graeme started his career at St Paul's (Jersey) and moved to Chelsea football club in 1987. In 1993 he switched to Blackburn Rovers where he won the 1995 Premier League title with Blackburn. In August 1997 Graeme became the most expensive defender in English football when he returned to Chelsea football club in a £5 million deal. Graeme remained there for six seasons before moving to Southampton football club. Graeme played at St. Mary's for two seasons announcing his retirement in May 2005 following Southampton's relegation.

Since retiring from football, Graeme has enjoyed punditry and commentary roles on TV and Radio. He has also moved into non sport formats presenting on programmes such as BBC2's 'Working Lunch' where he has the chance to further develop his knowledge and interest in financial and business affairs.

SUMMARY
Retired from football after 36 appearances for England and over 200 for Chelsea.
Won Premier League title with Blackburn.
Represented England in the World Cup - 1998
Ambassador for Chelsea FC CSR programme.
Contestant on ITV's 'Dancing on Ice'.
Autobiography 'Left Field' released in 2007.

Clients often ask about purchasing books for giveaways and delegate packs. Below you’ll find a selection of products by Graeme Le Saux. Click the images to view on Amazon's website. For bulk orders, please speak with your Booking Agent.

How to book Graeme Le Saux for your event