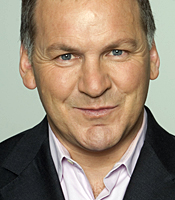 Ray Stubbs has carved a successful career in sports broadcasting after playing professional football with Tranmere Rovers FC. He joined Tranmere from school and was on the club's books for five years before switching to an administrative role with the club.

He then spent three years with BBC Radio Merseyside as a reporter and presenter. In 1986, Ray moved to BBC Manchester as an assistant producer, working on a number of sports including snooker, darts and bowls, as well as A Question of Sport.

He also worked as a producer, reporter and presenter on BBC2's investigative series On the Line, a series which saw him go to Italy in 1990 to report on England football fans at the World Cup Finals.

Later that year, Ray began working as a reporter on Grandstand, Match of the Day and Sportsnight.

At the start of the 1998-99 season he hosted two editions of Match of the Day Extra.

Ray covered the last two World Cups for BBC Sport as well as the European Championships in 1996 and 2000.

Ray has become a regular fixture in the Grandstand team after replacing Gary Lineker as Football Focus host at the start of 1999-2000.

Clients often ask about purchasing books for giveaways and delegate packs. Below you’ll find a selection of products by Ray Stubbs. Click the images to view on Amazon's website. For bulk orders, please speak with your Booking Agent.

How to book Ray Stubbs for your event