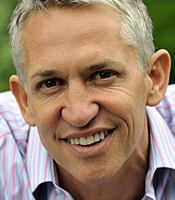 Arguably the most recognisable face in sports broadcasting, Gary Lineker OBE hosts for the BBC the most popular football show in the UK, Match of the Day, in addition to Olympic Games programming and the Sports Personality of the Year.

Also leading BT Sport's Champions League coverage, he is able to use his own professional background as a winner of the FA Cup and World Cup golden boot to bring out the best in analysts such as Rio Ferdinand and Alan Shearer.

Gary is also well known for his high-profile association with Walkers Crisps, which, dating back to 1995, makes it the longest uninterrupted celebrity endorsement campaign of all time.

During his illustrious playing career, which spanned from 1976-1994, Gary Lineker was one of the best-known and widely admired soccer players in the world. When he retired from the game Gary immediately took to sport-related presenting, working for BBC TV and Radio, including the coverage of the Atlanta Olympic Games.

In an international glittering career that took him as far as Spain and Japan, Gary played for Tottenham, Everton, Leicester City FC, Barcelona FC, Nagoya Grampus 8 FC and was in the England team for 9 years.

He captained the England side from 1990-92 and his goal strike rate of 48 goals for his country places him second on the all-time list behind Bobby Charlton.

A charismatic, popular personality for appearing live at corporate events and making all manner of appearances, Gary Lineker is widely recognised and admired world-wide for his BBC sports presenting and, to the older generations, as a key player in the England squad.

Keynote, After Dinner and Motivational Speaking
An entertaining, captivating and experienced public speaker, Gary is highly sought-after for a variety of commercial events, from conferences and seminars to gala dinners and champagne reception evenings.

Gary has developed various presentations drawn from his own experience as a world-class footballer and Captain of the England football team. His topics include, motivation, teamwork and leadership. With his sound knowledge of these subjects he can adapt his presentations to suit any corporate event.

Hosting & Presenting
With decades of experience under his belt as one of the BBC’s top sports broadcasters, there are no surprises that Gary Lineker is, as you’d expect, a very polished, sought-after and charismatic corporate awards host and presenter. He’s hosted all manner of corporate awards nights and dinners from a few hundred guests to over 1,000 at the large London hotels.

As a household name in sports, and recognised by all generations, Gary is the ideal draw and celebrity headliner if you want your event to be the ‘must-attend’ event of the year.

How to book Gary Lineker OBE for your event