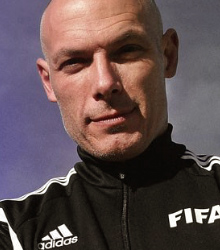 Counted amongst the all-time top referees by the International Federation of Football History and Statistics, Howard Webb was a professional football referee for 12 years, refereeing almost 300 matches in the English Premier League.

He was also a FIFA international referee for 10 years between 2005-2014 and was appointed to referee in 9 major tournaments, including the FIFA World Cups in 2010 and 2014.

Having taken charge of many high profile finals including the English FA Cup Final in 2009 and English League Cup Final in 2007, he achieved the unique honour in 2010 of being appointed as referee for both the UEFA Champions League Final and FIFA World Cup Final, and in doing so became the first referee in the history of the sport to take charge of both finals in the same year.

Howard first took up refereeing in local leagues in 1989. In 1993, he progressed to the Northern Counties East League as an assistant referee, becoming a referee for that league two years later. In 1996, he was appointed as a Football League assistant referee and, in 1998, fulfilled the same function in the Premier League, as well as being promoted to the Football Conference as a full referee. He was a sergeant with South Yorkshire Police but took sabbatical leave in 2008 to concentrate full time on his refereeing.

In 2000, he was included on the National List of Football League referees and three years later was promoted to the Select Group of professional referees who can take charge of Premier League games. His first game in the top tier of English football was in October 2003 when he took charge of a 0–0 draw between Fulham and Wolverhampton Wanderers. He was appointed to FIFA's international referees' list in 2005.

Since then, he has been appointed to referee some of world football's highest-profile matches, including a UEFA Champions League final and a FIFA World Cup final.

Howard retired from active refereeing in 2014 and works with broadcaster BT Sport on their Premier League, Champions League, Europa League and FA Cup coverage and with ITV on their coverage of the European Championships.
Additionally, Howard is still actively working within the game, and works with the MLS (Major League Soccer) in the US overseeing the development of their VAR technology (Virtual Assistant Referees).

Howard’s book, The Man in the Middle, was published by Simon & Schuster in 2017 Having been an Amazon bestseller following a serialisation in The Times, the autobiography gives an insight into the modern-day game and Howards journey from local lad from Rotherham to the biggest stage in world Football.

He was appointed a Member of the Order of the British Empire (MBE) in the 2011 New Year Honours for services to football.

Throughout his professional sporting career, Howard Webb drew continual praise for his authoritative and respected approach to refereeing from football bodies, pundits, colleagues, players and managers.

In his keynote motivational speeches, he talks about the pressures of dealing with the scrutiny and split-second decision-making involved in refereeing the modern game, as well as the motivation, teamwork and communication skills required to reach the very top.

Clients often ask about purchasing books for giveaways and delegate packs. Below you’ll find a selection of products by Howard Webb MBE. Click the images to view on Amazon's website. For bulk orders, please speak with your Booking Agent.

How to book Howard Webb MBE for your event