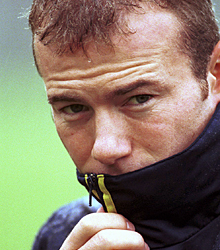 During his career he enjoyed successes at both club and international level, becoming one of the most prolific strikers of all time. In total he scored 422 goals for club and country, averaging 25 goals a season for each of his 17 seasons as a player.

He announced his international retirement following England's exit from Euro 2000 but continued to play for Newcastle United until 2006, when after an injury plagued season he retired completely from football. He then went to the BBC as a pundit for their flagship, Match of the Day.

Clients often ask about purchasing books for giveaways and delegate packs. Below you’ll find a selection of products by Alan Shearer OBE. Click the images to view on Amazon's website. For bulk orders, please speak with your Booking Agent.

How to book Alan Shearer OBE for your event