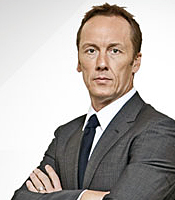 Lee Dixon formed part of the hugely respected Arsenal defence for the entire 1990s and beyond. He worked his way to the top of football slowly - playing for Burnley (where he served his apprenticeship), Chester City, Bury and Stoke City before he was signed by Arsenal boss George Graham in January 1988.

While defending is not as pleasing on the eye for football lovers, more seasoned connoisseurs of the game would refer to the way Arsenal's back four assembled itself throughout the 1990s. Dixon and Winterburn made the full back positions their own, while captain Tony Adams and the long-serving David O'Leary operated in the middle.

Dixon was a marauding right back, ever willing to support his winger David Rocastle and his attacking skills were still noted even though his main job (and the main priority of the side as a whole) was to defend. He also had a short spell during this period as the club's penalty taker. Arsenal took the chase for the League championship to the last day of the season when they faced Liverpool at Anfield on a Friday night at the end of May.

By the end of 1991, Lee Dixon had played in eleven internationals, including all of the Euro 92 qualifiers, through which England qualified for the finals in Sweden. As the finals approached, Dixon suffered an injury, allowing Stevens a route back into the side as the deadline for squad announcement approached. Taylor duly named Dixon instead of Stevens in his provisional squad, but ultimately neither went to the tournament. Dixon pulled out through injury so Stevens was recalled, only for the Rangers full back also to withdraw through injury. England ended up with no recognised right back in their squad and didn't get past the group stages.

In 1994, Dixon won a European medal to complement his domestic collection as Arsenal's legendary defence showed off their considerable ability to repel creativity among natural footballers. At the end of 1996, Arsène Wenger arrived at Highbury and started to introduce lifestyle policies to the Arsenal squad, changing their life's outlook, self-awareness and diet.

This allowed Arsenal's ageing defence to prolong their time at the top, and Wenger later admitted that he expected to replace each defender he inherited fairly quickly, but just as quickly realised he didn't need to. Dixon and his defensive colleagues never ceased in paying tribute to Wenger for giving them extra years at the helm of the game.

Dixon's impressive statistics as an Arsenal player tallied up 458 appearances in the League with 25 goals, complete with a huge haul of medals. In retirement, he has concentrated on several business interests including a highly-regarded restaurant in Berkshire. He is also making his name as a pundit for the BBC, recently beginning to earn the odd appearance on flagship football show Match of the Day.

How to book Lee Dixon for your event