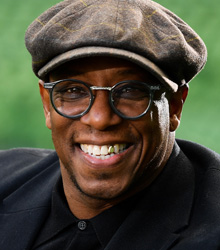 He spent his early days at non-league Greenwich Borough, before moving to Crystal Palace in the summer of 1985. He established a deadly striking partnership with new arrival Mark Bright in the 1989 season, scoring 27 League goals - a Palace record in the higher divisions.

Ian made a memorable substitute's appearance in the 1990 FA Cup final against Manchester United. He equalised minutes after coming on to the field and then putting Palace ahead in extra-time.

Ian Wright was capped 33 times for England - The first of his 33 full international caps came in 1991 before a transfer to Arsenal in September at a cost of a then club record £2.5m.

Club honours at Highbury included winners' medals in the League and FA Cups in 1993 and a European Cup Winners' Cup runners-up medal in 1995 before Arsenal secured the Premiership and FA Cup double in 1997/98.

Two seasons later he moved on to play with his son, England U-21 international Shaun Wright-Phillips, for a short spell at Nottingham Forest. From there he moved on to West Ham, Celtic and Burnley before retiring in July 2000 to pursue a broadcasting career.

Wright joined the BBC in January 2001, presenting the hit show Friends Like These, an Ian Wright entertainment show series, as well as Wright And Bright on Radio Five Live.

He was awarded the MBE in 2000 for his footballing achievements and remains one of football's most colourful characters.

How to book Ian Wright for your event