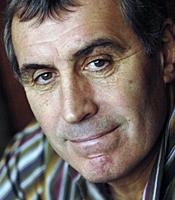 Retiring from professional football in 1996, Peter Shilton remains England's most capped player of all time, with a milestone 1005 games throughout his illustrious career, 125 of them for England, and earning him a place in the Guinness Book of Records.

Peter's career started age 13, when he trained at schoolboy level with Leicester City. In 1966, at 16 years old, he debuted with the Leicester first team, a move resulting in Leicester's current goalkeeper, Gordon Banks, being sold to Stoke City not long after. Peter made it to the FA Cup final at Wembley aged 19, and became one of the Cup's youngest ever goalkeepers.

While with Leicester City, Peter impressed England manager Sir Alf Ramsey enough for him to be offered a debut playing for his country against East Germany. After this game, at 22 years old, Peter regarded himself as his country's number two goalkeeper. In 1972, the England number one, Gordon Banks, had his career cut short following a car crash which damaged his eyesight. Peter was thrust into the limelight, battling with Ray Clemence for the coveted number one shirt. The next few years were difficult for Peter as Ray was offered more England games and Peter was sidelined. In 1977, after a stint with Stoke City, Peter asked for a transfer in hope of reviving his England career.

One of the most famous and talked-about moments in Peter's career occurred during the 1986 FIFA World Cup in Mexico. Following a slow start to the tournament, England beat Poland 3-0, winning the first round and leading them to play Paraguay in the second. After beating them with another 3-0 win, England faced a quarter final showdown with Maradona's Argentina, and a match that would become legendary in World Cup history.

Maradona had been on fire throughout the tournament, but England managed to minimise his influence in the first half. Early in the second half, an attempted clearance skewed towards the England penalty area, and Maradona used his hand to outreach Peter and punch the ball into the net, and offence inexplicably missed by the referee. Despite England's protests, the goal stood, and Maradona went on the score a second goal, his amazing solo effort. England battled back, with Gary Lineker scoring and moving agonisingly close to an equaliser, however the match ended 2-1 to Argentina.

Peter continued to play with England until the 1990 FIFA World Cup in Italy, where England were again unlucky, this time losing on penalties to Germany in the semi-final. After that match Peter retired with an amazing 125 caps, an England record that still stands today.

In 1992, Peter accepted a position as player-manager of Plymouth Argyle. Managing the club until 1994 he was anxious to reach the 1,000 match mark and, age 46, he decided to return to playing football. Joining Leyton Orient in 1996 Peter was able to fulfil this wish, entering into the Guinness Book of Records for playing in 1,005 league games. He retired from professional football aged 47.

During his playing career, Peter received an MBE and OBE for services to football. In 2002, Peter's fame as one of the greatest English goalkeepers of all time was sealed as he was made an inaugural inductee of the English Football Hall of Fame.

After Dinner & Motivational Speaking
Since retiring from professional football, Peter Shilton has carved a highly successful career as an established figure on the after speaking circuit, delivering speeches at corporate events as well as football dinners and other association events.

Peter Shilton’s experiences with 11 clubs, several England managers and some of the best players in the world have made him one of the most popular after dinner speakers in the UK and Europe. His fun and fascinating after dinner speeches, mixed with question and answer sessions, provide an opportunity to listen to some of the finest and most controversial moments in English football, delivered with enthusiasm and humour by a football legend.

Peter Shilton’s experience of more than 30 years in top flight football, 20 of which were at international level, provides an enthralling insight into world class sporting competition and the pressures involved.

Peter is also available for motivational presentations which can be tailored to personal, sporting and business audiences. These speeches are customised to your specific requirements, with a view to maximising results and meeting your corporate mission, values and goals.

As a keen golfing enthusiast, Peter has hosted many golf tournaments and participated in similar competitions. Having a football legend accessible on the day who will happily chat with your guests will make it an event to remember for all who attend.

Peter Shilton’s after dinner speech was very entertaining and funny and he was very obliging when it came to signing autographs and having photographs taken. So all in all the perfect gentleman.

Peter Shilton has worked with Vauxhall Motors on numerous occasions connected to our England Team Sponsorship, both in person at events and digitally through our online channels. He is extremely personable and professional and always allows that extra bit of time to make the experience for our guests in meeting a true England Legend a memory to treasure.

Peter Shilton was brilliant. He is an excellent speaker with a tremendous personality who simply went with the flow of the evening. Everyone enjoyed his company and he was a delight to work with. Brilliant! Thanks very much.

Clients often ask about purchasing books for giveaways and delegate packs. Below you’ll find a selection of products by Peter Shilton OBE. Click the images to view on Amazon's website. For bulk orders, please speak with your Booking Agent.

How to book Peter Shilton OBE for your event