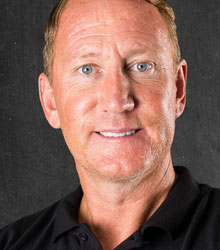 As a professional footballer, Ray Parlour spent his career as a midfielder playing for Arsenal, Middlesbrough and Hull City between 1992 and 2007. He notched up an impressive 466 games and 32 goals for Arsenal, where he played for 14 years — having joined as a trainee in 1989 — winning honours including three Premier League titles, four FA Cup and the 1994 UEFA Cup Winners' Cup.

He also played ten games for England between 1999 and 2000. It was in the Euro 2000 qualifier against Poland in 1999 that Ray made his England debut and went on to win 10 caps for his country. He was nicknamed the ‘Romford Pele’, an ironic sobriquet reflecting his combination of solid performance with a humorous, self-deprecating, down to earth personality and an image wholly lacking in glamour.

Ray Parlour has been described as an "unsung hero" and praised as a "fans' favourite" for his work ethic and commitment, playing alongside some of football’s greats including Ian Wright, Paul Merson, Patrick Vieira, David Seaman and Dennis Bergkamp. He was a regular fixture on Arsenal’s right-wing or in central midfield and was integral to many of the team’s successes.

In the 1997-98 season, Ray Parlour was part of the team who won the League Championship for the first time in seven years. They completed ‘the Double’ in the same season winning the FA Cup at Wembley, where Ray was named man-of-the-match.

He left Highbury on a high note in the summer of 2004 shortly after Wenger’s ‘Invincibles’ had completed an unbeaten title campaign. He signed for Middlesbrough and remained there for two and half years until 2007 when he joined Hull City for a short period before retiring. He remains one of Arsenal’s most highly decorated players.

In June 2012, Ray Parlour was one of several retired footballers enlisted by the semi-professional Wembley to assist them in the forthcoming season's FA Cup. His fellow former internationals Claudio Caniggia, Graeme Le Saux, Martin Keown and Brian McBride joined him as players, David Seaman was recruited as a goal-keeping coach and Terry Venables, formerly the manager of England, served as the club's technical advisor. A TV documentary captured the team's improbable bid for Wembley Stadium glory.

A natural communicator and storyteller and genuinely all-round nice bloke, Ray Parlour is often seen in the media working for the BBC, ITV, Sky Sports and Radio 5 Live & TalkSPORT and is frequently booked on the after dinner speaking circuit.

Appealing to corporate bookers and private clients alike, Ray is one of the sporting world’s most popular after dinner speakers, entertaining audiences with anecdotes and stories from his Arsenal and England days and giving punditry on the

Clients often ask about purchasing books for giveaways and delegate packs. Below you’ll find a selection of products by Ray Parlour. Click the images to view on Amazon's website. For bulk orders, please speak with your Booking Agent.

How to book Ray Parlour for your event