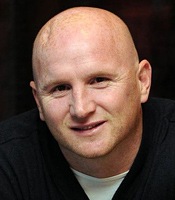 John Hartson turned professional in 1992 and played for Luton Town until 1995 when he signed for Arsenal. The fee of £2.5 million was, at the time, record breaking for a teenager. John scored 14 goals in 53 Premiership games for the Gunners before being sold to West Ham in February 1997. John remained at West Ham for the next two years, but joined Wimbledon in 1999 where he became one of their most expensive signings.

John spent two years at Wimbledon which was followed by a brief spell at Midlands club Coventry. In 2001 he joined Scottish side Celtic and it was here that he enjoyed one of the most successful periods of his career. During five seasons he scored more than one hundred goals for the club, and also won the Scottish PFA Players' Player of the Year award (shared with Fernando Ricksen) and the Scottish Football Writers' Association Player in 2005. John won the hearts of the fans and became one of their most popular players.

John joined West Bromich Albion in 2006 on a two year contract and during this time spent a brief spell at Norwich City on loan. He announced his retirement from the game in 2008.

John also had a successful international career representing the Welsh national team on fifty one occasions. He is currently the strikers coach for Wales.

In 2009, at the age of thirty four, John was diagnosed with testicular cancer. Desperately ill (the cancer had spread to his brain and lungs) he had life saving surgery and spent many weeks in intensive care.

Following this ordeal John underwent gruelling chemotherapy treatment. Thankfully, he has made a miraculous recovery and now devotes a great deal of time to the charity set up in his name - the John Hartson Foundation.

Clients often ask about purchasing books for giveaways and delegate packs. Below you’ll find a selection of products by John Hartson. Click the images to view on Amazon's website. For bulk orders, please speak with your Booking Agent.

How to book John Hartson for your event