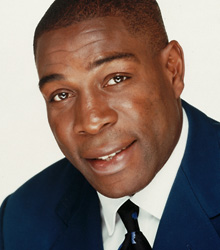 A household name in Britain and considered by many to be a national treasure, Frank Bruno started boxing at the age of 9 when he joined the Wandsworth Boys Club.

It was at the club where he won an MABC title; Frank boxed three times as junior, winning twice. During his amateur career he boxed 21 times, winning 20 (he avenged his only defeat by Irish International, Joe Christie).

Frank started boxing professionally in 1982, his ring record to date is 44 contests with 40 victories. His only defeats have been by James 'Bonecrusher' Smith and in the World Title fights against Tim Witherspoon, Mike Tyson and Lennox Lewis.

Since retiring from boxing and becoming an all-round television personality, Frank has appeared many times in pantomime and also presented the BBC TV series People, Channel 5's It's A Knockout and made guest appearances on A Question of Sport and The Big Stage.

He was voted the SOS Sports Personality of The Year for 1989 and 1990. An MBE was awarded to Frank Bruno in the 1990 New Year's Honours list.

Clients often ask about purchasing books for giveaways and delegate packs. Below you’ll find a selection of products by Frank Bruno. Click the images to view on Amazon's website. For bulk orders, please speak with your Booking Agent.

How to book Frank Bruno for your event