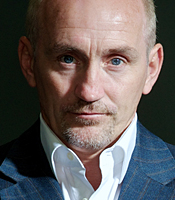 Barry McGuigan was crowned World Boxing Association (WBA) Champion in June 1985, achieving unparalleled popularity in Ireland and throughout the world. Born in Clones, his principled stand against sectarian divides united people during a troubled time in Ireland’s political history.

Barry started boxing at an early age, and throughout his juvenile career was recognised as a future potential force in the sport. After juvenile boxing experience at the Wattlebridge boxing club, Barry, with the help of his trainer Frank Mulligan established himself as an exceptional amateur at the Smithboro boxing club. His first major championship came when he defeated Martin Brereton for the All Ireland Amateur Championship in 1976.

Barry (fighting at Featherweight) turned professional in 1981 under the guidance of his new manager, Barney Eastwood. During the good times with Barney Eastwood he rapidly climbed the peaks of boxing, reaching the summit of his career in 1985. In February of 1985, he defeated Juan Laporte (in a fight described by Barry as "[his] most difficult") on points to become the number one contender for the WBA Featherweight crown.

Barry successfully defended the world title twice against Barnard Taylor (in September 1985) and Danilo Cabrera (in February 1986), before travelling to Las Vegas in June 1986 for his third title defence against a little known texan, Steve Cruz. In stifling heat (129 degrees), and suffering from dehydration, Barry lost his world title on points.

In April 1988, Barry McGuigan returned to the ring and won his first two fights. However his comeback was short lived as he lost his next fight. The much publicised break-up with his manager, Barney Eastwood in 1987 was a traumatic experience for Barry.

Between 1987 and 1990, Barry was largely responsible in founding the Professional Boxers Association (PBA). He was made president of the union, and was honoured by the boxing fraternity for his contribution to the sport. He also runs the Barry McGuigan Boxing Academy, working to promote healthy lifestyles in schools and the community in East London.

Today, Barry McGuigan lives with his wife, Sandra and his three children in Kent. He is engaged in various commercial ventures, his main occupation being a sports correspondent for the television channel, Sky Sports.

Barry McGuigan speaks on a range of topics, including the following:

Clients often ask about purchasing books for giveaways and delegate packs. Below you’ll find a selection of products by Barry McGuigan MBE. Click the images to view on Amazon's website. For bulk orders, please speak with your Booking Agent.

How to book Barry McGuigan MBE for your event