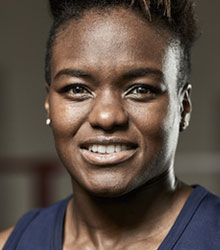 Nicola Adams will be recognised in history for winning the first ever Olympic Women's Boxing Gold Medal at the London 2012 Games.

Nicola is Great Britain's most decorated female boxer. She started boxing at the age of twelve and had her first bout a year later. In 2007, she was the first ever English female to earn a medal in a major tournament when she won silver in the European Championships.

She followed this up a year later, becoming the first English woman to earn a medal in the AIBA Women's World Championships in China - again she won the silver medal, but only narrowly beaten by the Polish World Number One.

Injury threatened to rule out any further success as Nicola was sidelined for much of 2009 with a debilitating back injury. However, showing characteristic drive and determination, she slowly recovered from this, and was selected to be part of the first ever Women's GB Boxing squad in March 2010 - with the aim of training towards London 2012.

From then, Nicola Adams continued to go from strength-to-strength, showing remarkable talent in the ring. In September 2010, she won her second Silver Medal at the World Championships. In October 2011, she became European Champion, and in doing so, won Great Britain's first ever Women's Gold at a major Championship.

Nicola Adams qualified for the London 2012 Olympic Games by winning her third World Championship Silver Medal. She faced the same opponent, China's Ren Cancan, in the Olympic Final, but this time was not to be denied. Nicola turned the tables on Cancan to become Olympic Champion, and win the first ever Olympic Women's Boxing Gold Medal.

Nicola was awarded and OBE in the 2017 New Years Honours list for services to Boxing.

Clients often ask about purchasing books for giveaways and delegate packs. Below you’ll find a selection of products by Nicola Adams OBE. Click the images to view on Amazon's website. For bulk orders, please speak with your Booking Agent.

How to book Nicola Adams OBE for your event