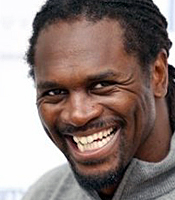 A graduate from Brunel University in Sports Studies, Audley Harrison boxed at Repton Amateur Boxing Club in Bethnal Green and went on to become British Super Heavyweight champion in 1997. He retained the title in 1998 and won Gold at the 1998 Commonwealth Games. In 2000, Audley captured the hearts of the nation when he became the first British Heavyweight Olympic Champion, winning Gold at the Sydney Olympics.

Six days after returning home, Audley announced his intention to turn professional, and to do so on home ground, which he did in 2001. Embarking on a highly successful career as a full-time boxer, he became European Champion in 2010, fought for the World Heavyweight title in 2011, and won the Prize-fighter tournament twice, in 2009 and 2013.

Also in 2001, Audley set up his own promotions company to self-manage his boxing career and released his autobiography “Realising the Dream”, the story of a true British Champion, who presents a very real challenge to the world of international boxing. Audley Harrison only took up boxing at the age of 19. Even before his gold medal-winning success in Sydney, Audley was receiving offers in excess of £100,000 to turn professional. But he was determined to make his mark at the Olympics. He also wanted to complete his education.

In 2011 Audley Harrison took part in the BBC's Strictly Come Dancing, partnering with dancer Natalie Lowe. Together they made it to the seventh round before being voted out. In 2000, Audley Harrison was awarded an MBE by HM The Queen for services to sport.

Outside of the ring, Audley Harrison successfully self-managed his professional boxing career through his own promotions company. Serving as CEO, he carved an impressive resume of business successes in the boardroom; negotiating with major stake holders, securing agreements and partnerships that continued until he left England and relocated to America. Some of these included spearheading a ground-breaking 17-fight television broadcast license deal with the BBC. He secured a 17-fight Title Sponsorship deal with Cantor Fitzgerald and negotiated a 3-fight television licensing deal with ESPN. He also secured several high profile sponsorships deals — becoming the first boxer in Britain to sign a direct broadcast deal.

Audley Harrison is highly experienced in conceptualising, and leading teams in event planning, negotiations, devising heads of agreements points for contracts, and implementing strategies that allowed his company to increase revenues for each flight promotion. He has extensive experience in planning and organising training camps, that require meticulous attention to detail, and excellent project management skills in budgeting, and timeline management.

Supremely confident, full of self-belief and dedication, Audley Harrison is an Olympic hero and an inspiration to sports fans everywhere. In his captivating motivational speeches Audley reveals the motivation behind his decision to follow his Olympic dream and he talks openly about the family support that has backed his campaign.

Audley Harrison is also an adept and sought-after keynote speaker, and through his vast experience running his own Promotion company to manage his professional boxing career, he speaks on the following topics:

Octagon have worked with Audley for over 10 years. Audley is a fantastic role model to all young people. His journey in sport and business is inspiring. His 'never give up' attitude and strong values serve him well and have always been key in reaching his goals. He's personable, entertaining and eloquent.

Clients often ask about purchasing books for giveaways and delegate packs. Below you’ll find a selection of products by Audley Harrison MBE. Click the images to view on Amazon's website. For bulk orders, please speak with your Booking Agent.

How to book Audley Harrison MBE for your event