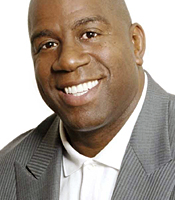 Role model, sports legend, and successful entrepreneur, Magic Johnson has overcome his share of challenges and pain. Johnson shines at the podium, inspiring audiences with the story of his stunning ascent, his philosophy for success, and his vision for a bright and promising future.

Earvin Johnson first earned the name "Magic" by Fred Stabley Jr., a local sports writer in Lansing, MI after watching the high school standout record a rare triple-double in a game as a sophomore. Mr. Johnson went on to lead his high school team to the state championship his senior year. He then went on to play for Michigan State, leading that team to the national championship in one of the most thrilling games in NCAA basketball history against Indiana State University and future Hall of Famer Larry Bird.

Magic Johnson played his entire professional career with the Los Angeles Lakers, racking up five NBA titles, three NBA finals MVPs, 12 All-Star appearances, three league MVPs and a gold medal as a member of the 1992 "Dream Team" Olympic squad. He transformed his position as point guard, ushering in a new style of play deemed "Show time" and often showcased his skills on the national stage against friendly rival Larry Bird and the Boston Celtics.

Mr. Johnson is still actively involved with the NBA as an analyst for ESPN's NBA Countdown and as the Vice President and part owner of the Los Angeles Lakers.

Clients often ask about purchasing books for giveaways and delegate packs. Below you’ll find a selection of products by Earvin 'Magic' Johnson, Jr. Click the images to view on Amazon's website. For bulk orders, please speak with your Booking Agent.

How to book Earvin 'Magic' Johnson, Jr for your event