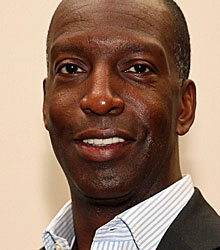 Michael Johnson is nothing short of a legend. His progression through the ranks of the track world were swift and stunning; he was a part of the USA Olympic team in Barcelona in 1992, Atlanta in 1996, and Sydney in 2000. He established a record of 13 Olympic and World Championship gold medals during his 11-year career.

A performer, the likes of which has never been seen before, Johnson spent his days chasing the legends and record books of years gone by. Along the way, he developed into the best combined 200/400 meter sprinter ever.

In the summer of 1990, Michael Johnson won thirteen consecutive 200 meter races. Obtaining the six fastest 200m times recorded for the year, Johnson secured the number one world ranking. He also defeated the world's best 400m sprinters by running four sub-45 second races. Johnson blew away the field in the 200m at the 1991 World Track and Field Championships in Tokyo, Japan, clocking the world's fastest 200m for the second straight year.

Having established himself in the United States, Johnson went on to dominate the international track scene. His first major international breakthrough came in Edinburgh, Scotland in July, 1990 where he raced a field that included Calvin Smith, Floyd Heard and defending Olympic Champion Joe DeLoach. On a chilly 55 degree night, Johnson destroyed what he called the "greatest field I had ever run against", posting a personal best of 19.85.

1996 was the year for Michael Johnson's unprecedented Olympic double record breaking victories in both the 200 and 400 meters in Atlanta. He began his quest to win four gold medals at the 1996 Olympics in Atlanta in top form; seeking redemption for the bout with food poisoning that killed his individual medal chances in 1992.

A series of meets throughout 2001, including the Penn Relays and Goodwill Games, concluded Michael's farewell competition tour. Fans around the globe had witnessed the making of a track & field legend and there's no doubt that Michael's legacy to the sport will remain forever.

Since he retired from professional sport, Michael has worked with such companies as Microsoft, Sony, UBS, Bank of Scotland, and Proctor and Gamble, and has received widespread acclaim as a commentator for BBC Sport.

Away from the corporate world he serves on the board of the Laureus World Sports Academy and as an Ambassador for Beyond Sport, helping to support organisations working to bring about positive social change through sport.

Throughout his athletic career, Michael Johnson was in constant demand to undertake motivational and corporate speaking engagements. His revered success in this arena inspired him to pursue corporate speaking on a more full-time basis since his retirement from professional sports.

Michael Johnson’s motivational speech covers a number of themes, most notably his philosophy of success, as well as performance, dedication and the setting of targets throughout his athletics career.

As well as the lessons learnt on the track, Michael speaks with passion, experience and clarity on the challenges of transferring from being an individual athlete in complete control of your own performance, to being an entrepreneur in charge of the management and motivation of others.

Michael Johnson is never distracted by the opportunities his immense talent offers him. He is an exceptional example of how extreme pressure can make one more focused on realising his own true potential. He is a role model for children, aspiring athletes and professionals everywhere and his impact on the world of sport is truly remarkable.

People were raving about his presentation!

Thank you to Michael for presenting so spellbindingly at our dinner. The whole conference was abuzz after his performance and our clients were still talking about it the next day. He was also generous with his time - staying us till almost 11.30pm while people took selfies. Apart from being an athletics legend, he is a very intelligent and articulate guy. Just a class, class act all round.

Clients often ask about purchasing books for giveaways and delegate packs. Below you’ll find a selection of products by Michael Johnson. Click the images to view on Amazon's website. For bulk orders, please speak with your Booking Agent.

How to book Michael Johnson for your event