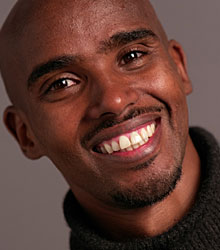 Sir Mo Farah is double Olympic champion and the UK's greatest ever distance runner - a far cry from his humble beginnings in Somalia, arriving in London from Mogadishu at the age of 8 and speaking very little English.

On the 4th August 2012, Farah created history at the London Olympic Games. In his first race Mo capped off 'Super Saturday' by winning the 10,000m gold in a time of 27:30.42. This was Great Britain's first ever Olympic gold medal in the 10,000m and came after two other gold medals for Great Britain in the same athletics session. A week later on the 11th August 2012, Mo completed the hardest track double of them all by winning the 5,000m in a time of 13:41.66.

Mo Farah now joins just 5 people (Zatopek, Kuts, Viren, Yifter, Bekele) in the history of the Olympic Games to win the 5k/10k double and the only athlete to do it on home soil. To finish off an amazing 2012 Mo's wife Tania gave birth to twin daughters Aisha and Amani to whom Mo dedicated each of his gold medals.

Sir Mo Farah currently lives between Teddington, Surrey and Portland, Oregon. He was awarded the CBE in the 2013 New Year's Honours List, and a knighthood in the 2017 New Year’s Honours List.

Clients often ask about purchasing books for giveaways and delegate packs. Below you’ll find a selection of products by Sir Mo Farah CBE. Click the images to view on Amazon's website. For bulk orders, please speak with your Booking Agent.

How to book Sir Mo Farah CBE for your event