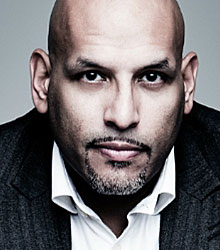 At the age of 17, when he first picked up a basketball, John Amaechi was considered "too late to the game" and "not athletic enough" to have any chance of success in domestic sport, much less overseas. Six short years later he became a "starter" in the National Basketball Association (NBA) for the Cleveland Cavaliers - the only undrafted free-agent in the leagues history to start at the beginning of an NBA season.

Eleven years from first picking up a basketball, John Amaechi became the first and only Britain to have a place in the US Basketball Hall of Fame. John captained the England squad since his arrival to the team in 1997 and even in 'retirement' led the English Squad to Bronze in the 2006 Commonwealth Games in Melbourne.

He has been part of two European championship teams and turned down a seven-year guaranteed contract from the most successful team in American Sports over the last decade, the Los Angeles Lakers. John is the only British player to have had a career in the NBA and was honoured as one of the NBA's most improved players in 2000, showing an amazing ability to adapt and learn well into his career.

John Amaechi is highly regarded for his ability to overcome adversity, including a life-threatening injury, in his quest for international success. He has made a habit of achieving the seemingly impossible in sports and life for more than a decade. Indeed, he has even been described as "a player with little innate physical talent, who rose to remarkable heights on the back of exceptional personal drive, terrific will and a tremendous goal-setting and life-planning strategy".

He has firsthand knowledge of planning for your dream, setting goals and maintaining standards of achievement for the long haul. He understands motivation and personal development, the roots of success. Having lived in Continental Europe for four years before moving to America for a further ten, his international and cross-cultural experience is immense and his formulas apply to an endlessly diverse clientele across Europe and the Americas.

In February 2007, after his retirement from the NBA, John Amaechi became the first openly gay NBA player after coming out in his memoir Man in the Middle.

John appears regularly as a pundit for CNN, MSNBC, CBC and the BBC. He has also appeared on a shows like BBC Breakfast, The Daily Show, Real Time with Bill Maher, Oprah and many more. Topics have included the impact of depression, interpersonal skills, leadership, team cohesion, emotional literacy and diversity and inclusion on individual and team performance.

John Amaechi is an accomplished motivational speaker with experience addressing a diverse cross-section of clients, including an impressive list of fortune 500 corporations, international charities and world-class educational institutions, throughout Great Britain, Europe and the United States.

John inspires, informs and charms audiences with his candour and wealth of international experience in sport, business and life. He has extensive expertise in keynote and motivational speaking, conference chairmanship and workshop administration.

John is able to set and maintain tone, as well as use wit, warmth and insight to link the individual facets of any programme. His demeanour and experience allow for an inspiring, entertaining and unforgettable interaction.

John Amaechi doesn’t have a 'standard speech' or presentation, but here are just some of the topics he has recently addressed:

• Business Ethics: Being a Full-Time Person of Principle
• Authentic Leadership: Learning to Lead from your Core
• Inspiring Intrinsic Motivation: Creating and Sustaining the 'Self-Starter' Drive
• A World of Competition: Using Sports to Teach Business
• More Chance of Being Hit by a Meteor!
• Organisational Harmony
• Consequential Conversations
• Sport for Development

When asked if there is a theme that runs through his speaking engagements John replies that he tried to impress on his audiences that we can all be remarkable agents for positive change, whether on a family, community, educational, corporate or governmental levels.

He says that in all these contexts, "...the most improbable of people, in the most unlikely of places can become extraordinary". He believes it is our duty to try to do just that.

John Amaechi spoke at our national sales meeting and even though sales people are notorious for being quite cynical and hard to impress, John had an amazing impact on us all! He is a very interesting and thought provoking person and left us all feeling very motivated. His honesty and integrity was a breath of fresh air!

When you glimpse John Amaechi, one may imagine a man who has it all. Rather, John truly earned his success by overcoming many self-doubts, setbacks and obstacles made by others. He is inspirational not by claiming to be a hero or a role model, but by being brazenly truthful. His values are universal: love of family, contributions of his time and attention to young people, as well as his gifts as a teacher and writer.

John is a truly inspirational speaker, but he also has a very special quality that provokes much deeper reflection. He created questions in my mind that have remained there and challenged me almost every day since.

It was unforgettable, it was inspirational, he was in tune with the room and what he said was pitched at exactly the right level for his audience - everyone was hanging on his words. It felt like he was speaking to each of one of us personally.

John Amaechi did a fantastic job as conference chair! He succeeded in providing exactly the right tone for the day with his ability to combine warmth and humour with insightful and thoughtful comment about serious issues. John is a significant and powerful speaker and chairperson, and I won't want to book anymore conferences without first checking his availability to work with me!

His speech was incredibly moving and touched so many people in the room - the delegates responded tremendously warmly to all that he said. It just couldn't have been better.

John Amaechi is a truly inspirational speaker, but he also has a very special quality that provokes much deeper reflection. He created questions in my mind that have remained there and challenged me almost every day since.

John Amaechi's speeches at our Convention and Parliamentary Launch have been both powerful and moving, well-informed and possessing great clarity. His ability to inspire his audience is rare and we have always been extremely impressed with gravity his presence brings to an event.

Clients often ask about purchasing books for giveaways and delegate packs. Below you’ll find a selection of products by John Amaechi OBE. Click the images to view on Amazon's website. For bulk orders, please speak with your Booking Agent.

How to book John Amaechi OBE for your event