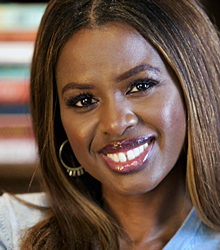 June Sarpong has enjoyed a career spanning more than two decades in the media and entertainment, which has seen her become one of the most recognisable faces of British television.

She is a media phenomenon, and is the only host of her generation that’s equally comfortable interviewing politicians, celebrities and members of the public.

June has also taken on the world's most challenging live audiences, hosting 2005's major Make Poverty History event in London's Trafalgar Square and presenting at the UK leg of Live Earth in 2007. In 2008, alongside Will Smith, she also hosted Nelson Mandela's 90th Birthday celebrations in front of 30,000 people in London's Hyde Park.

June has written two books on diversity and equality issues – Diversify: Six Degrees of Integration (2017) and The Power of Women - Why Feminism Works for Everyone (2018). Diversify looks at the social and economic cost of excluding marginalised groups, whilst The Power of Women debunks some of the myths around feminism and highlights why improving female representation in all areas makes a vital contribution to society, business and politics.

She is the cofounder of the global WIE Network (Women: Inspiration & Enterprise). WIE first launched in NYC in 2010 and then in the UK in 2012. This acclaimed conference has featured leading speakers from a gamut of industries, previous speakers include: Sarah Brown, Melinda Gates, Arianna Huffington, Donna Karan, Queen Rania, Nancy Pelosi, Iman and many more. June also co-founded the Decide Act Now (DNA) summit, promoting discussion and innovation.

After living in America for eight years, she moved back to the UK in 2015, and is now a regular panellist on Sky News’ weekly current affairs discussion show, The Pledge.

In October 2019, June Sarpong made history, becoming the BBC’s first ever Director of Creative Diversity, with a remit for developing strategies to support both on-air and production talent representation and portrayal across the BBC, its platforms and its partners, to make the BBC more inclusive and representative of the broad and diverse audience it serves.

June has worked with many reputable brands throughout her career including Natwest, Matalan and Ancestry. She was the ambassador for Superdrug’s Shades of Beauty campaign, to tackle product inequality in high street beauty, with the aim of making it more accessible for black and Asian women to shop affordably on the high street.

She was also announced as part of the Grazia Collective, a line-up of brilliant women ambassadors and recently featured on the cover of Vanity Fair’s ‘En Route’ magazine.

Presenting & Hosting
A versatile and highly experienced presenter with decades of experience, June Sarpong has fronted everything from Channel 4’s T4 to programmes on Sky Arts and numerous BBC documentaries. She has interviewed some of the most high-profile global names in politics, music and from the silver screen.

So it comes as no surprise that June is a highly in-demand and very busy awards host, conference facilitator and interviewer for all-manner of corporate and commercial engagements. She is comfortable chairing a roundtable event for 20 in a boardroom as much as an awards dinner for 200 or hosting a global conference for several thousand delegates.

Keynote Speaking
June Sarpong has built a reputation as a leading campaigner on a wide range of diversity and inclusion issues. She is a passionate advocate for change in the workplace and a champion for greater representation of BAME people throughout the media.

A superb and powerful speaker, delivering presentations that are celebrated for their compelling nature, humour and analytical clarity, June speaks on subjects including diversity, equality, unconscious bias and discrimination. She has the unique ability to inspire confidence and hope in others — especially those who are often marginalised in our society, including women, those living with disabilities, and the LGBT community.

Some of June’s keynote speech topics include:
• Why Diversity is good for Business?
• Cost of Discrimination: Why discrimination costs us all
• Business as Unusual: The future of business and how to create corporate change
• Women Count: The benefits of empowering women in the workplace
• He for She: How men can help close the gender inequality gap
• How organisations can create an inclusive culture.

Working with June & hearing her perspective was like a breath of fresh air. She is incredibly knowledgeable about DEI, but even more powerfully – she is relatable and cuts right to the heart of employees, bringing them along in the journey and helping them see their place in the workplace we all want. I’d highly recommend June to speak at your organisation and work with your teams at large. I look forward to inviting June back to speak specifically to our top executives!

The event was brilliant, a big thank you to June! She was engaging, professional and the perfect host. Her Q&A questions for the panel section were thoroughly thought through, considered and relevant to our themes. Her hosting abilities allowed the panellists to give great responses and the entire event went as planned, to time and had real impact – a lot of which was down to June!

I just wanted to say what a pleasure it was working with June Sarpong – she was brilliant at the Dove launch and very easy to work with. Her hosting was natural and controlled, and she worked the room brilliantly! She made such an impression that Dove want to use her for another event later in the year!

June Sarpong was an absolute pleasure to work with and was a fantastic host on the night. She had great command of the stage and the audience’s feedback has been nothing short of positive. We’d definitely like to work with June again in the future

I wanted to say a big thank you to June Sarpong for her incredible hosting and moderating at last night’s panel. Feedback from CNBC and NBCU boards has been absolutely terrific. Please also pass on my thanks to June – she gave me a copy of her book which I see is signed too!

From the entire team at Bacardi, we all wanted to say a big THANK YOU to June Sarpong for hosting SpiritForward this week, and for the time and energy she put into making it a success!June was the most perfect host and such an excellent fit for the evening.

Thanks so much to June for being part of Our Planet - all went really well! June Sarpong both hosted and interviewed like an absolute pro, she’s a true professional and her genuine interest in what the interviewees had to say was unbelievably refreshing to see! Thanks so much!

Monday was a huge success and we’ve had such incredible feedback from our guests about June Sarpong’s keynote and her evening hosting, which was superb, professional and so fun to be a part of!I also wanted to say what an absolute joy she was to work with. Such a lovely, smart and inspirational woman! Please do pass that on to her from us all at Promax UK and a big thanks, once again

Clients often ask about purchasing books for giveaways and delegate packs. Below you’ll find a selection of products by June Sarpong OBE. Click the images to view on Amazon's website. For bulk orders, please speak with your Booking Agent.

How to book June Sarpong OBE for your event