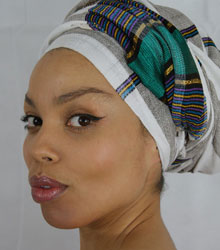 Listed as one of the BBC’s broadcasting stars of the future, Emma Dabiri is a presenter, social historian and writer.

Emma is co-presenter for Britain’s Lost Masterpieces on BBC4 and Virtually History on YouTube Originals, a ground-breaking new series which uses virtual reality technology to re-live dramatic events in history.

Emma has previously presented Back in Time for Brixton and the Back in Time Confectioners series (BBC Two), Is Love Racist? (Channel 4) and has done a number of social history films for The One Show (BBC).

On radio she has hosted BBC Radio 4’s Saturday Review and Front Row. She has authored a landmark Radio 4 documentary, Journeys in Afrofuturism as well as EXPOSED: Young Female Photographers which explores the work of three exciting, emerging photographers. Both are available on BBC Sounds. She is also developing a documentary on Haitian Surrealism.

Emma’s debut book Don’t Touch My Hair was published by Penguin in 2019. She was a columnist for The Dublin Inquirer and is one of the BBC’s Expert Voices. She has also had work published in a number of academic journals and newspapers. Emma’s interdisciplinary work crosses African Studies, art, sociology, history, film, literature, theatre, popular culture and music. She is a teaching fellow in the Africa department at SOAS.

Emma gives regular talks and takes part on panels at festivals and arts venues. She also DJs and hosts a range of live events.

I wanted to write to thank you for being part of the Being Mixed Race panel during WOW. The debate and discussion highlighted so much and it felt like we covered a lot of ground. You’ll be really pleased to hear that we had marvellous feedback from the session.

On behalf of us all at Blackstone we wanted to thank Emma for her time earlier and for the brilliant Q&A session. We’ve received some wonderful feedback following the session.

Just a note to say thank you so much for all your support in organising yesterday – Emma was so brilliant and engaging and we had an audience of more than one hundred, with such great feedback. Please do pass on a massive thank you to Emma and hopefully we can work together again soon.

Please pass on our thanks to Emma for bringing such a wonderful conversation to our event. We really appreciate her perspective and willingness to speak on the topics we had planned. Already we have had great feedback and Emma was a huge part of that, she has gained a number of new fans today.

Clients often ask about purchasing books for giveaways and delegate packs. Below you’ll find a selection of products by Emma Dabiri. Click the images to view on Amazon's website. For bulk orders, please speak with your Booking Agent.

How to book Emma Dabiri for your event