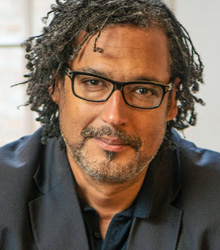 One of the UK’s foremost and respected historians — ranked amongst the most influential Black Britons of our time — David Olusoga is Professor of Public History at Manchester University and a BAFTA award-winning documentary maker, broadcaster and writer.

A regular contributor to the Guardian, Observer, New Statesman and BBC History Magazine, his books include Black and British, which won the PEN Hessell-Tiltman Prize and the Longman-History Today Trustees Award, The Kaiser’s Holocaust and The World’s War. He was also a contributor to The Oxford Companion to Black British History.

A regular face on our television screens, David Olusoga presented the major BBC2 series A Black History of Britain, from slavery to the twentieth century, from the Windrush Generation to the country today. His contribution to landmark BBC Arts series Civilisations explores contact, trade, interaction, empire and race. He has also presented shows such as A House Through Time, Black and British: A Forgotten History and the BAFTA Award winning Britain’s Forgotten Slave Owners.

As the pre-eminent historian working in British television today, David has worked in front of, and behind the camera, for over 20 years. He has devoted his entire working life to telling the stories we, as a society, have collectively chosen to forget, or ignore.

David was born in Lagos, Nigeria, to a Nigerian father and British mother, before migrating to the UK when he was five years old, where he grew up on a council estate in Gateshead and studied history and journalism before starting his career in broadcasting. Later his home was attacked by the National Front on multiple occasions and his family eventually forced out of their home.

His move into television came about when David realised black people were not represented in the media landscape, so following his graduation from university he became a TV producer.

Following his Liverpool-based BBC series A House Through Time David Olusoga moved on to tell the story of a Georgian end-of-terrace property in Ravensworth Terrace, Newcastle, on his native Tyneside. Starting the story from around the time the house was built in 1824, David explored the often complex lives of the owners and inhabitants from pre-Victorian times right up to the present day – with some extraordinary revelations along the way.

In 2019, David Olusoga was awarded an OBE for services to history and community integration.

For David Olusoga, history has always been a public activity — it’s about reaching out to and educating as many people as possible. He’s spent his career working with or alongside businesses and institutions committed to making history inclusive, expansive and diverse.

His insightful and inspiring keynote speeches address some of the thorniest and most contentious issues of human history; Being Black & British, Race & Migration, Identity & Belonging, Slavery & The Struggle For Equality, The History of Racism and, more recently, the Black Lives Matter protests.

David Olusoga’s passion, clarity and depth of knowledge sets a very high benchmark and, for that, he is a highly sought-after speaker.

The People History Forgets
Focussing on individual well-known historical figures, David Olusoga invites his audience to reconsider the marginalised history of black British people in the light of the global nature of British trade and empire building, and reassess the perceived differences between black British history and mainstream British history.

A broader examination of the tea and cotton industries, for example, would recognise the role played by enslaved black Americans and Africans, transforming a limited view of British domestic history into an understanding of a more holistic, interconnected and shared past.

David’s keynote presentation covers a wide gamut of black British history; not just the economic and moral factors associated with the British slave trade, but also looking further back to the Napoleonic wars and even as far as Tudor times.

The feedback has been absolutely immense! We’ve honestly never had such positive feedback on a speaker, no wonder he’s so busy! David Olusoga is an incredible speaker and was so generous with his time staying in the breakout room for way longer than half an hour, please pass on our thanks.

In terms of feedback for David yesterday,  I very much struggle with the words that adequately describe his exquisite intellect, and beautiful challenge of the issues faced. His historical grounding and subsequent reflection on the modern day constructs were beautifully delivered. Outstanding professionalism, revealing and challenging while offering inspiration and hopefulness. His presentation was well constructed and superbly delivered. His responses during the question and answer session were clear, concise and reflective of his overall grounding,  knowledge and professionalism,  and equally challenging of the status quo. In basic terms, I feel honoured to have had the opportunity to have met him. The feedback has been amazing, and I expect that as others reflect on the session as I continue to do, there will not be a person that will not have impacted in some way.

David was absolutely fantastic, we are really looking forward to our colleagues watching the session as it will have significant impact.

David Olusoga brings a previously inaccessible part of history that needs a voice and the feedback from our business was very positive, we found the storytelling made the pertinent information an accessible conversation. It was engaging and inclusive to all without sugar coating the reality or sensationalising it. David is very relatable and has an integrity that allows the listener to connect... We were left with wanting to hear more and of course his books will provide that.

I’d like to convey an enormous thanks and gratitude to you, your company and Professor David Olusoga. The event was watched and enjoyed by over a thousand members of our staff. Professor Olusoga once again showed what an incredible, gracious and erudite person he is. We were so pleased to have him as our guest.

Clients often ask about purchasing books for giveaways and delegate packs. Below you’ll find a selection of products by Professor David Olusoga OBE. Click the images to view on Amazon's website. For bulk orders, please speak with your Booking Agent.

How to book Professor David Olusoga OBE for your event

To book Professor David Olusoga OBE, please submit an online enquiry, email bookings@nmp.co.uk or speak with one of our booking agents on +44 (0)1372 361 004.