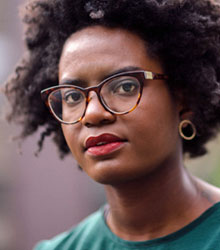 Reni Eddo-Lodge is an award-winning journalist and author. She has written for the New York Times, the Voice, Daily Telegraph, Guardian, Independent, Stylist, Inside Housing, the Pool, Dazed and Confused, and the New Humanist.

In 2014, she wrote about her frustration with the way that discussions of race and racism in Britain were being led by those who weren't affected by it. She posted a piece on her blog, entitled “Why I'm No Longer Talking to White People About Race.”

Her words hit a nerve. The post went viral and comments flooded in from others desperate to speak up about their own experiences. Galvanised by this clear hunger for open discussion, she decided to dig into the source of these feelings. What resulted was her now-best-selling book of the same title.

Prior to that, in January 2018, British Vogue named her a ‘new suffragette’. And later that year she won a Bold Moves Award from Women in the Creative Industries for the publication of Why I’m No Longer Talking to White People About Race.

In 2015, Reni won a 30 to watch award from MHP Communications. In 2014, the Guardian listed her as one of the 30 most exciting people under 30 in digital media. She has also been listed in Elle Magazine’s 100 Inspirational Women list, and The Root’s 30 black viral voices under 30.

Through a candid moderated interview or ‘fireside chat’, Reni Eddo-Lodge discusses her journey to writing the best-selling book, Why I’m No Longer Talking To White People About Race.

It’s a powerfully-argued exploration of race and racism in contemporary Britain, about the layers of structural racism an individual might encounter during their life, the rise of far right politics around the globe and what it is to be a person of colour in Britain today.

Reni explores issues ranging from eradicated black history to the political purpose of white dominance, whitewashed feminism to the inextricable link between class and race.

She describes how, in attempting to raise issues of race and racism in progressive circles, she received reactions trying to shut down her argument. Talking about the idea of colour blindness, in which issues of racism are avoided by 'not seeing race', the award-winning and best-selling author also describes how much of the narrative around race and civil rights looks to the US, at the cost of overlooking black British history.

Clients often ask about purchasing books for giveaways and delegate packs. Below you’ll find a selection of products by Reni Eddo-Lodge. Click the images to view on Amazon's website. For bulk orders, please speak with your Booking Agent.

How to book Reni Eddo-Lodge for your event