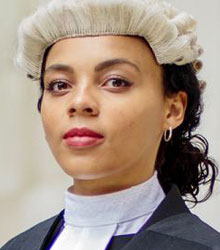 The chain of events that led Alexandra Wilson to a career in law began one fateful night when she was just 17 years old.

Just a teenager, when a close family friend was stabbed to death on his way home from football, his death compelled Alexandra to enter the legal profession to search for answers and make a difference.

She studied Politics, Philosophy and Economics at the University of Oxford and and was awarded two prestigious scholarships. She studied for a Graduate Diploma in Law and her Master of Laws at BPP University in London.

Alexandra was awarded the first Queen’s scholarship by the Honourable Society of the Middle Temple, awarded to students showing exceptional promise in a career at the Bar.

She specialises in children and finance law, particularly cases with an international element and has a busy practice in family law, which includes private children, public children, domestic abuse and finance cases.

She is the founder of Black Women In Law, an organisation with over 500 members. She also co-founded One Case At A Time, an organisation set up to assist disenfranchised minorities in the legal process.

Alexandra grew up on the border of East London and Essex. She is the eldest of four children with a white British mother and black British father. Her paternal grandparents were born in Jamaica and came to England as part of the Windrush generation.

She first came into the public eye when mistaken for a defendant three times on the same day in court. She has made it her mission to challenge discrimination in the courtroom. Alexandra has been interviewed on BBC News, ITV news, Good Morning Britain and Women’s Hour, and has also been profiled in The New York Times and the Independent.

Her best-selling debut book In Black and White: A Young Barrister’s Story of Race and Class in a Broken Justice System, tells the story of her early legal career, recreating tense courtroom scenes, heartbreaking meetings with teenage clients and moments of frustration and triumph that make up a young barrister’s life.

Just wanted to say what a brilliant event last night was with Alexandra Wilson. She is such a wonderfully eloquent advocate for diversity and her words were very empowering. My generation have a lot to learn from younger role models like Alexandra. Many thanks for this great series of events.

Alexandra is so lovely and was such great fun to work with.

Clients often ask about purchasing books for giveaways and delegate packs. Below you’ll find a selection of products by Alexandra Wilson. Click the images to view on Amazon's website. For bulk orders, please speak with your Booking Agent.

How to book Alexandra Wilson for your event