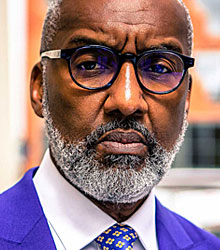 Described by The Guardian as “the man who risked everything to fight racism in the police force – from within”, Dr Leroy Logan is a former superintendent in the Metropolitan police. He retired in 2013 after 30 years exemplary service having been involved in the Stephen Lawrence Inquiry, the inquiry into the killing of Damilola Taylor and the organisation of the London 2012 Olympics.

He is also a founding member of the Black Police Association (BPA) and was the first Chair of the National BPA, as well as Chair of the London chapter between 2000-04. He is still a current member and has been throughout their 30 year existence.

Leroy is one of the UK’s most highly decorated and well known black police officers. A highly respected and well regarded commentator on policing in black communities, he believes that there is still much work to do in creating a more equitable and fair criminal justice system.

Born in 1957 to Windrush-generation Jamaican parents, Leroy Logan is a proud Londoner, a staunch Gooner, an advocate for good relationships between the police and Britain's minority ethnic communities, a mentor to young people, and an advisor on knife crime. After leaving school, he attended the University of East London from 1976 to 1980 where he earned a BSc degree in Applied Biology.

However, policing wasn't his first career choice. After three years working as a research scientist at the Royal Free Hospital, Leroy decided a change was in order. He became a policeman in 1983, despite his father being brutally beaten and arrested by police officers over a traffic matter, because he wanted to make changes from within.

Since his retirement, Leroy has built a reputation as a go-to person expert, using his decades of experience to give insightful, critical analysis on current events surrounding our justice system. He’s been called upon by the likes of Channel 4, Good Morning Britain, The Guardian, LBC, BBC Radio 4, HardTalk, Newsnight and more.

He was described by The Voice newspaper as "one of the Black officers who helped change the Met" and, in 2000, was awarded an MBE for his work in advancing policing. His story of changing the Met from the inside was the subject of a Small Axe film, the Golden Globe and BAFTA-winning BBC series directed by Steven McQueen.

In September 2020 Dr Leroy Logan authored his debut book Closing Ranks, a look at serving in the Metropolitan Police force as a Black man over three decades. It is a lively and entertaining read; it's also a history lesson in race relations in modern-day Britain, and a manifesto for anyone with a desire to mentor young people. Throughout, Leroy's passion for good policing shines through, as does his concern to guide and empower young people.

Underpinning all is his strong Christian faith, which helped him persevere in a frequently hostile work environment - and in the process, encourage other black officers to stay on and help change the culture within the police.

In his inspiring keynote presentations, Dr Leroy Logan discusses issues of race and ethnicity in modern Britain; the cases that required perseverance and determination, including the Stephen Lawrence murder inquiry; and working towards building a better system and culture within the police force.

With three decades of experience working in the Met, Leroy has become a highly respected voice on building relationships between police and community, creating a fairer justice system and how to mentor and engage young people to reduce knife crime.

As one of the officers who gave evidence for the Macpherson report, Leroy has also become a leading voice on policing in black communities. He discusses the need for structural change to manage the deficit in soft skills and regulate the consequences of digitalising the force. He also looks at ethical leadership, the importance of creating the necessary space to challenge a system, and how to avoid blocks in middle management.

Leroy gained an honorary PhD from the University of East London for his work on youth empowerment initiatives and has been an advisory board member for multiple charities working with underprivileged and underrepresented youths, from gang-related violence to supporting their educational needs.

He has continued to advise and lead companies in the security sector and is a highly sought-after speaker on the keynote and motivational speaking circuit.

Clients often ask about purchasing books for giveaways and delegate packs. Below you’ll find a selection of products by Dr Leroy Logan MBE. Click the images to view on Amazon's website. For bulk orders, please speak with your Booking Agent.

How to book Dr Leroy Logan MBE for your event