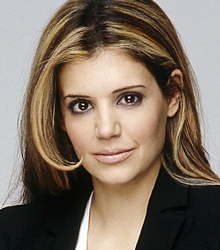 Psychologist, author, magazine columnist and corporate consultant, Dr Linda Papadopoulos is one of the most well-known and respected psychologists in the UK.

Initially she became known by the public for her regular appearances and commentary on the television phenomenon Big Brother, Dr Linda has also provided professional psychological commentary for numerous British television and radio programs such as GMTV, The Wright Stuff, Newsround and LK Today. Her expert opinions are also regularly featured on a range of news programmes including, CNN, Sky News, Channel 5 News, ITN News and BBC Breakfast.

Dr Linda is not only Cosmopolitan magazine's resident psychologist and a contributing editor, but she also writes a hugely-popular monthly column and interviews celebrities for the magazine's celebrity-feature articles. The author of several books and texts, her most recent book, The Man-Manual, offers insight on how to overcome the differences between men and women, while Mirror Mirror: Dr Linda's Body Image Revolution offers guidance and support for individuals dealing with poor body image.

As well as her clinical research and media work, Dr Linda Papadopoulos often works with large corporations who want to utilize her research and academic background to effectively conduct studies and analyze quantitative and qualitative data. Her analysis provides major brands like Dior, Diageo, Brantano and Camelot with valuable insight on topics such as consumer behavior. The results of her research are often included in written material for general circulation and press releases.

An accomplished academic psychologist, Dr Linda Papadopoulos is published widely in peer-reviewed academic journals on counselling and medical psychology, and she is often invited to give specialist lectures at universities and medical schools in England and throughout the world. Founder and director of the successful Programme in Counselling Psychology at the London Metropolitan University, she was appointed Reader in Psychology in 2001 - a great distinction for such a young age. She was recently voted in the Top 20 therapists in London by the Evening Standard and was awarded the Madame Figaro Women of the Year Award in the field of academia.

Dr. Linda Papadopoulos is the ideal keynote speaker or panellist to share cutting edge expertise on psychology, motivate delegates and teach them the psychological tools for success in the business world, contribute to discussion on Women’s Issues from corporate culture to appearance, and is a charming and professional host for evening Awards Ceremonies and Conferences.

Clients often ask about purchasing books for giveaways and delegate packs. Below you’ll find a selection of products by Dr Linda Papadopoulos. Click the images to view on Amazon's website. For bulk orders, please speak with your Booking Agent.

How to book Dr Linda Papadopoulos for your event