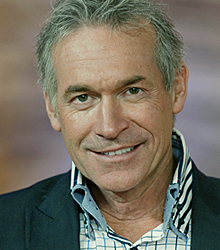 Dr Hilary Jones qualified in 1976 at the Royal Free Hospital in London having studied Arts subjects to A level and then converting to a 6 year medical degree.

In 1979 he worked for a year as the single-handed medical officer on Tristan da Cunha, the most isolated inhabited island in the world. In 1981 he worked as a troubleshooting GP and emergency doctor for the oil industry at Sullom Voe in Shetland for Offshore Medical Support.

He became a Principal in General practice and a GP Trainer in the early 1980s and began presenting educational medical TV programmes for British Medical TV in 1986. Sky TV then adopted these programmes for their news bulletins soon after. In 1989 Dr Hilary joined the most successful TV breakfast station ever, TVAM. He and Lorraine Kelly were the first presenters to be signed up by GMTV when it won the breakfast franchise in 1993.

He has written several books including 'Before You Call The Doctor, 'What's The Alternative?', 'Your Child's Health', 'I'm Too Busy To Be Stressed', 'Total Well Being' and 'Natures Remedies'. His first novel, 'What's Up Doc?' was published in August 2009.

He is a regular contributor to the Steve Wright Show on Radio 2 and also writes for Fabulous magazine that is now the Sun on Sunday, Rosemary Conley magazine and News of the World. Dr Hilary Jones has appeared on a variety of TV quiz shows including The Chase, Pointless and Who Wants to be a Millionaire winning tens of thousands of pounds for the several charities he loyally supports.

Still working as a part-time GP, Dr Hilary remains a passionate advocate of medical education for all and exercise and humour as the best medicine of all. He is available for after-dinner and keynote speaking, awards hosting and personal appearances.

We had a lovely awards evening on Saturday. It was an absolute pleasure to meet Dr Hilary Jones; he was charming to us and our guests and made quite an impact when he spoke about his work, supporting the charity and the importance raising awareness to save young lives.

Dr Hilary Jones was great, we've had some very positive feedback from staff at all levels across the business, so I think the content and tone of his presentation was spot on – it included very relevant topics and Dr Hilary has a style that appeals to a wide cross section of people. We also appreciated his sense of humour and his presentation was a nice mix of serious topics with more light-hearted anecdotes that went down well. I would have no hesitation in recommending Dr Hilary as a key note speaker.

Clients often ask about purchasing books for giveaways and delegate packs. Below you’ll find a selection of products by Dr Hilary Jones. Click the images to view on Amazon's website. For bulk orders, please speak with your Booking Agent.

How to book Dr Hilary Jones for your event