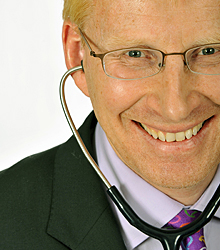 Phil Hammond is an NHS doctor, campaigner, health writer, investigative journalist, broadcaster, speaker and comedian. He has done all these jobs imperfectly and part-time since 1987, and was also a lecturer in medical communication at the Universities of Birmingham and Bristol.

As a doctor, Phil worked part time in general practice for over 20 years, and has also worked in sexual health. He currently works in a specialist NHS team in Bath for young people with chronic fatigue syndrome/ME.

Phil presented five series of Trust Me, I’m a Doctor on BBC2, and has been a presenter for BBC Radio Bristol since 2007. He is Private Eye’s medical correspondent, broke the story of the Bristol heart scandal in 1992 and gave evidence to the subsequent Public Inquiry.

In 2012, he was shortlisted with Andrew Bousfield for the Martha Gellhorn Prize for Investigative Journalism for ‘Shoot the Messenger,’ a Private Eye investigation into the shocking treatment of NHS whistle-blowers. In 2014 and 2015, he was voted a Top 100 NHS Clinical Leader by the Health Service Journal. He has fiercely supported NHS junior doctors in their battle with the government against an imposed, untested and potentially unsafe new job contract.

As a comedian, Phil was half of the award winning double-act Struck Off and Die, with Tony Gardner. Phil has appeared many times on Have I Got News for You and Countdown. His NHS comedy, Polyoaks, is written with David Spicer and has had four series on BBC Radio 4. He is a columnist for Reveal, and writes comment pieces for the Times.

Phil is a Vice President of the Patients’ Association and a patron of Meningitis UK, the Doctors’ Support Network, the Herpes Viruses Association, Patients First,PoTS, the NET Patient Foundation and Kissing It Better. He is also a fundraiser and advisor for the Association of Young People with ME.

Phil has never belonged to any political party but was highly critical of the Health and Social Care Bill (now Act) in a BBC1 Question Time debate with then-health secretary Andrew Lansley. He said the reforms were ‘wonk’, there was no convincing narrative explaining the reasons for the changes and that the focus on competition rather than the collaboration and co-operation needed for an integrated, evidence lead service.

Dr Phil is married to Jo, also a GP, and has two children, two Labradors, two cats, a pony and a full head of ginger hair.

Dr Phil Hammond is highly sought-after as both a business keynote speaker and a more informal after dinner speaker.

Just a few of his popular speech topics include:
• How to survive and thrive in life
• How to stay mentally healthy (your physical health will follow)
• How to survive and thrive in the NHS (for staff and patients)
• How to save the NHS
• How to make the NHS safer
• How to blow the whistle constructively, without ruining your career
• How the NHS has changed in my 27 years working in it
• How to get whole patient care in the NHS and social care system
• How to have a good death
• How to use the media constructively, and the bear traps to avoid

...and pretty much any other health related topic with enough time to prepare, from recepit of a full brief.

Dr Phil Hammond was brilliant and definitely a high point of our event. He chose his material really well for our audience and we have had loads of positive comments. Thanks so much.

I received excellent feedback from our guests who enjoyed listening to Dr Phil Hammond, and it was a pleasure to look around the audience and see lots of smiling faces. He was very funny, and it was a great way to end the event. Thanks for all of your help with this booking.

We couldn’t be happier with how it went, Dr Phil Hammond was an excellent speaker, hitting all the right notes with our delegates, and an exceptional number of them made a point of commenting afterwards on how much they enjoyed it. The booking process was excellent, and you asked for all the right information - this was particularly helpful as a reminder!

Please could you pass on our thanks to Phil for being the perfect debate chair last evening. Everyone there appreciated – and benefited from – his professionalism, knowledge and wry humour which facilitated a lively debate on this wide-ranging topic.

Clients often ask about purchasing books for giveaways and delegate packs. Below you’ll find a selection of products by Dr Phil Hammond. Click the images to view on Amazon's website. For bulk orders, please speak with your Booking Agent.

How to book Dr Phil Hammond for your event