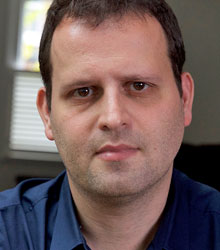 Adam Kay is an award-winning comedian, TV writer and Sunday Times best-selling author of two books. He is also a former NHS junior doctor, having previously worked for many years in obstetrics and gynaecology.

However, the well-documented hours and emotional impact placed upon NHS doctors weighed heavily, and after six years of intensive training followed by another six years on hospital wards, Adam hung up his stethoscope in 2010 to try his luck as a TV comedy writer.

By the end of his NHS career Adam had become a registrar — the most senior person on a shift and responsible for everything. However, he was unable to forgive himself when he accidentally cut a baby’s cheek during a caesarean operation at the end of a 12-hour shift, during which he had not even sat down.

He began to suffer terrible stress and high blood pressure and ultimately took the difficult decision to quit. The final straw had come during a shift when Adam performed an emergency caesarean on a woman with an undiagnosed low-lying placenta. The baby was stillborn and the mother lost 12 litres of blood. He was told to “fear the worst”. For years Adam suffered nightmares from that horrific incident.

Adam comments that medical school does not prepare students for the ­horrific things they will witness, “No one entering medicine speaks to a psychologist. But train drivers do. They assess how you would cope if someone jumps in front of a train. If you want to go on Love Island or Big Brother you are vetted”.

With his new-found career as a comedy writer, Adam built up a successful and impressive resume, working on shows such as Mrs Brown’s Boys, Mongrels, Watson & Oliver, Up the Women, Very British Problems, Flat TV, Our Ex Wife, Who is America?, Mitchell and Webb and Child Genius. He also wrote and co-created BBC Three sitcom series Crims (2015) along with Grandma's House writer Dan Swimer.

Live
As an award-winning live performer, Adam has sold out multiple Edinburgh Fringe runs, West End seasons and UK and international tours. He is in great demand for corporate events and parties, with hundreds of testimonials available on request — including, strangely, from Prince Harry's 30th birthday.

Award-winning books
Adam's first book, This is Going to Hurt (2017), spent over a year at number one in the Sunday Times bestseller list. It was the bestselling non-fiction title of 2018, it's the best-selling e-book of all time, and has sold a total of 1.5 million copies.

Revisiting Adam’s former career as a junior doctor and scribbled in secret after endless days and sleepless nights, it provides a no-holds-barred account of his time on the NHS front line.

Hilarious, horrifying and heartbreaking in equal measure, This is Going to Hurt has been translated into 36 languages and achieved number one bestseller status internationally.

Twas the Nightshift Before Christmas (2019) is Adam's second book. Christmas is coming, the goose is getting fat... but 1.4 million NHS staff are heading off to work. A must-read for anyone who has ever set foot in a hospital, Adam Kay delves back into his diaries for a hilarious and sometimes heartbreaking peek behind the blue curtain at Christmastime.

Twas the Nightshift Before Christmas is a love letter to all those who spend their festive season on the front line, removing babies and baubles from the various places they get stuck, at the most wonderful time of the year.

After Dinner Speaking & Keynote Speaking
In between sold out tour dates, West End runs and Edinburgh Festival Fringe shows, Adam Kay is in huge demand for corporate events; bringing his experiences to life as a speaker, giving a humorous, inspiring, and fascinating performance.

Adam’s wealth of experience makes him ideal for live events – a comedian who is passionate and hugely knowledgeable about his subject matter, whilst unfailingly funny about it.

He has entertained at events such as Prince Harry's 30th birthday at Buckingham Palace, and for Deloitte, The British Medical Association, Soho House, Imperial College, and hundreds more, entertaining with his cutting-edge humour, which has gained him a cult following throughout the UK.

Brilliant at tailoring his performance to the style and theme of an event, and skilled in assessing whether the set needs to be light hearted and comedy based, or whether there is an important message to get across, Adam is very astute at deciding how to pitch his performance.

Musical Cabaret
Adam Kay presents his trademark medically themed songs, and excerpt from his award winning, best selling book. This hilarious after dinner performance is effectively a shortened and scaled-down version of his award-winning tour show.

Adam went down a storm at our awards ceremony. We have had such great feedback.

He was BRILLIANT!!! Still talking about him today.

Adam could not have been more perfect! He gauged the mood in the room so well - although there was quite a lot of wincing from the non-medics in the audience, the medics found it all hilarious. In fact, after he'd finished he was mobbed by a few star-struck newly qualified doctors, and one relatively aged professor afterwards... my most effusive thanks to him. Thank you for helping to make my party a most memorable event for everyone who came. It really was everything I could have wished for.

We have booked Adam for numerous corporate events, and I can’t think of an occasion where the client hasn’t raved about him afterwards. A true professional, uniquely funny, and always goes the extra mile in tailoring his performance to the specific event.

Thank you for making such a fantastic contribution to National Education Day for Doctors in Training. Your talk was wonderfully received and highly beneficial.

The Royal College of Physicians of Ireland.

Adam went down very well and we’ve had very positive feedback... excellent delivery; it made our conference end on a high.

Clients often ask about purchasing books for giveaways and delegate packs. Below you’ll find a selection of products by Adam Kay. Click the images to view on Amazon's website. For bulk orders, please speak with your Booking Agent.

How to book Adam Kay for your event