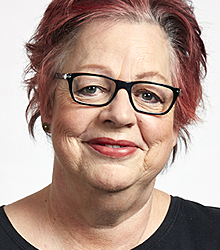 Jo Brand has established herself as one of the best female comics in Britain. Despite her wealth of television work including her own shows - Jo Brand's Hot Potatoes (BBC1) and Channel 4's Through The Cakehole, Jo prefers performing live and feels that "nothing tops the thrill of the theatre".

Sussed, polemic, deceptively droll, with a razor-sharp perspective on all that is sexist and sizeist, her popularity is well deserved. On her latest tour, Jo tackled things that irritate her most, questioning the logic behind such diverse topics as teenage boys, keeping fit and sex.

Whilst subjects close to Jo's heart such as feminism, fat people and chocolate remain a staple of the show, there are also the taboos. Her pet hates include supermodels, sad blokes, politicians and thin people - to name a few.

Born in Kent, Jo's first job was at Dr Barnardo's home - following in the footsteps of her mother, who was a social worker. After this, she moved to London and became a psychiatric nurse. Dealing on a daily basis with drug addicts, alcohol abuse and the clinically depressed, it was her sense of humour that kept her going. Having been a nurse, Jo feels that she likes people and likes nothing more than being able to have a chat with them whilst on stage.

Aside from her award-winning Channel 4 show, Jo Brand Through The Cakehole, Jo's other television appearances include: BBC's Have I Got News For You, Never Mind The Buzzcocks, Absolutely Fabulous and hosting Channel 4’s Bake Off - Another Slice.

The function was excellent and Jo Brand was a huge success, a night not everyone will remember.

It was a pleasure to meet Jo Brand and everyone I spoke to liked her a lot and most importantly laughed, personally I was sorry when her act ended, which is just how it should be... next year we will have the task of "following that", but that is a problem for another day.

In a word we thought Jo Brand was GREAT! Spot on for us. All feedback was excellent from the 'audience' and the way she pitched it was at just the right level. Not sure how we're going to live up to that next year! So a big thank you for arranging Jo ... She was well worth the three year wait!

Clients often ask about purchasing books for giveaways and delegate packs. Below you’ll find a selection of products by Jo Brand. Click the images to view on Amazon's website. For bulk orders, please speak with your Booking Agent.

How to book Jo Brand for your event