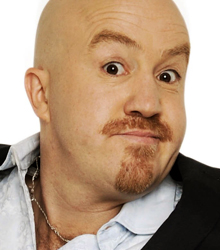 Andy Parsons is one of Britain's foremost topical funny-men. As a lynchpin of London's infamous Comedy Store Cutting Edge team, he is one of the most prolific performers currently working, having to update weekly to keep up to speed with the team's take on current affairs and political banter.

Best known as a regular panellist on BBC Two's Mock the Week, Andy Parsons started in comedy as a double-act with Henry Naylor, who he met at Cambridge University, where they became part of the Footlights group.

They started TBA, which was billed as London's first sketch comedy club, and performed together at the Edinburgh Fringe seven times between 1993 and 2001. In 1998, they also performed in Sydney, Melbourne and Adelaide.

Like many writers, they cut their teeth on Radio 4's Week Ending, and were offered their own show, Parsons and Naylor's Pull-Out Sections in 2001, which ran for nine series on Radio 2. In 2008, Parsons wrote and starred in his own Radio 4 sitcom, The Lost Weblog Of Scrooby Trevithick. On television, the pair also wrote for Spitting Image, Noel's House Party, Hale and Pace and Alas Smith And Jones, among others.

Parsons performed his first solo show at the Edinburgh Fringe in 2000, and returned regularly until 2006. He has appeared at the Montreal Just For Laughs comedy festival in 2006; the New Zealand Laugh Fest in 2003, 2004 and 2006; and Cat Laughs, Kilkenny, in 2005. He won a Time Out award for comedy in 2002, and was named best international act by the New Zealand Comedy Guild in 2004.

Apart from Mock The Week, his other TV credits include Live At The Apollo, QI, Live Floor Show, They Think It's All Over and the BBC's Stand-Up Show.

Andy Parsons was brilliant and he pitched his act just right. The audience loved him and my client was delighted.

Clients often ask about purchasing books for giveaways and delegate packs. Below you’ll find a selection of products by Andy Parsons. Click the images to view on Amazon's website. For bulk orders, please speak with your Booking Agent.