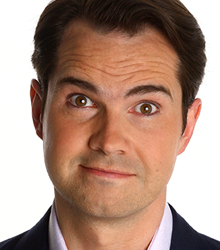 One of the most original and distinctive stars on television, as the face of Channel 4, Jimmy Carr has many successful shows behind him, including '8 out of 10 Cats', 'The Friday Night Project' and 'Your Face Or Mine'.

Jimmy has also broken into US TV with appearances on 'The Tonight Show with Jay Leno', 2 on 'Late Night with Conan O'Brien' and his own 12 part series of 'Distraction' on Comedy Central. He also hosted The Fix on Netflix alongside Canadian comedian Katherine Ryan and American comedian and actor DL Hughley.

Considered by many to be the hardest working performer in comedy, Jimmy Carr performs his stand up tours continuously over the course of the year; notoriously only taking only five weeks break between them and also fitting in his TV filming and corporate engagements as well.

London-born Jimmy was a straight-A student who gained a first class honours degree from Cambridge before going on to accept a marketing position with international oil firm, Shell. Discovering he wasn't made for a desk job, after two years Jimmy took the opportunity of voluntary redundancy and signed up to a course in neuro-linguistic programming, where he quickly realised how his mind was actually working to hold him back.

All within the space of a month, Jimmy had left full time employment at Shell and began performing as a stand-up comic. He performed his first paid stand-up gig later that month, having only done his first unpaid pub show the previous month.

Jimmy is a prolific writer as well as performer, with writing credits including Bo Selecta! (BBC2) & Meet Ricky Gervais (C4) as well as writing for Lily Savage and Frank Skinner.

As would be expected of a comedian with a huge international profile, Jimmy Carr also performs at all the international comedy festivals, and was one of very few top British comedians selected to appear at the world's two top Comedy Festivals; in Montreal for the 'Just For Laughs' Festival in July 2002 and 2003 and in Aspen at the International Comedy Arts Festival in February 2003.

Clients often ask about purchasing books for giveaways and delegate packs. Below you’ll find a selection of products by Jimmy Carr. Click the images to view on Amazon's website. For bulk orders, please speak with your Booking Agent.

How to book Jimmy Carr for your event