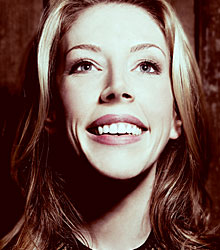 An outsider, a maverick, a natural raconteur: they're all skills that have made Canadian-born Katherine Ryan a celebrated comedian and one of the top stand-ups in the UK.

She moved from Ontario to the UK with her comedian partner to work for a fashion magazine and eventually found her way onto the comedy circuit and television. Since then, she's appeared on Mock The Week, 8 Out Of 10 Cats and Never Mind The Buzzcocks, QI, Sweat the Small Stuff, Jack Dee's Sky Atlantic panel show Don't Sit In The front Row as well as sitcoms on Channel 4 and BBC2. She was voted through to the final of BBC One's Let's Dance for Comic Relief after a spectacular performance as Nicki Minaj performing Starships.

Katherine Ryan was the 2008 winner of the Nivea Funny Women Awards and is a fresh and bitingly funny addition to the UK stand-up scene. As well as being a writer-performer Katherine is also a talented actress and played the lead role of George in Victoria Pile's Channel 4 series Campus. She also appeared regularly throughout the second series of Episodes as Merc's Assistant.

Despite a natural talent for stand up comedy, Katherine Ryan never featured it on her career map. She studied city planning at university and took a job as a waitress at restaurant chain Hooters before advancing to corporate trainer, travelling the country to train other waitresses.

Her blend of charm and comic timing was perfect for the service industry – until comedy took over charm. “In Hooters, you need to be vacuous, and I was a little bit smart,” she explains. “On the occasion when I was fired, I wrote, ‘Club Sandwiches, not seals!' on the menu board. “In Canada, that's very politically sensitive because these fishermen like to beat baby seals with a club – it's kind of a cultural tradition. I thought it was kinda cute to write that – but no! The owner shouted at me in front of the whole restaurant, called me a freak, and I went next door to the comedy club because I had nowhere else to go. “I sat their alone, and then did five minutes on stage. It just snowballed from there.”

Katherine Ryan is available for corporate and private events.

She was amazing and everyone really enjoyed her act.

How to book Katherine Ryan for your event