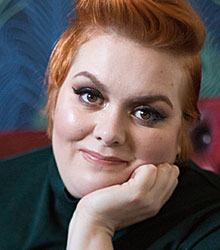 Award-winning comedian and proud Bristolian Jayde Adams is an uncut gem; a force of nature; dangerous and unafraid; the future... it’s safe to say that when comedienne and national treasure Dawn French says “Jayde Adams is the 3rd funniest woman in the world. Fact,” she might just be onto something.

From a working-class background in Bristol, zero formal training in anything other than fishmongery in the British supermarket Asda and Freestyle Disco Dancing, to finding her creative home with the drag queens of East London – Jayde Adams is a gay icon in the making.

She started performing stand-up comedy in 2011, following the premature death from an inoperable brain tumour of her elder sister Jenna, with whom she had danced competitively for 13 years at her aunt's dance school in Bristol. As a child, Jayde attended several youth theatre groups in Bristol, including Bristol Old Vic Youth Theatre but never formally trained in acting or singing.

Just like Bette Midler’s humble beginnings at the Bath Houses — Jayde’s first gig in London was actually at a disused brothel with a troupe of drag queens — her fast ascending star in a predominantly middle-class arts industry is all the more impressive.

Jayde’s is the winner of the 2014 Funny Women award at the Leicester Square Theatre and her debut Edinburgh Fringe hour Jayde 31 was nominated for Best Newcomer in 2016, whilst her hugely successful, critically acclaimed 5 star Edinburgh Fringe show ‘The Ballad of Kylie Jenner’s Old Face’ was filmed and released worldwide on Amazon Prime and was renamed Serious Black Jumper.

A regular on our TV screens, in 2019 Jayde Adams hosted, along with Fred Siriex from Channel 4's First Dates, the BAFTA-nominated Channel 4 show Snackmasters. And in 2020, she hosted a new food show on Netflix and Channel 4 with Heston Blumenthal called Crazy Delicious, which was long-listed for a TV Choice Award.

She is a supporter and ally of the LGBT community and, having started her live performance career at drag bars such as the Royal Vauxhall Tavern, Jayde often cites the LGBT community in London as the reason she found confidence after the death of her sister in 2011.

As an actor, Jayde Adams plays the role of Leanne in Alma’s Not Normal (BBC2) in 2021 and Julia Petley in Good Omens (Amazon Prime).

How to book Jayde Adams for your event