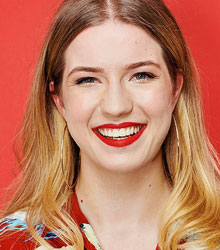 Olga Koch, a Russia-born east London-based comedian, performs stand-up comedy onstage and creates cathartic performance art in the privacy of her own home. She trained at the UCB Theatre in New York, as well as the Soho Theatre and the Free Association in London.

Daughter of Alfred Koch, her father was head of the Russian Federal Agency for State Property Management in the 1990s and oversaw some of Russia's controversial privatisation schemes, including the Voucher privatisation that enabled the creation of Russian oligarchs. He was also briefly Deputy Prime Minister of Russia.

Olga’s family moved to the USA when she was a teenager, then to the UK where they settled in Surrey. Her first show was in 2016, called Me, Me, Me, which was followed in 2017 by Data Night and Good Vibes.

In 2018, she was nominated for Best Newcomer Award at the Edinburgh Fringe Festival for her debut hour, Fight, and for Best Show at Leicester Comedy Festival in 2020.

Prior to those successes she was the Amused Moose National New Comic 2017 finalist, Leicester Square New Comedian of The Year 2016 and was selected for the BBC New Comedy Award in 2017 and 2017.

Olga has written for and appeared on Mock the Week (BBC2), The Now Show (Radio 4), Pls Like (BBC Three), Hello America (Quibi) and various sketches and shorts for BBC Three, Channel 4 and Comedy Central.

How to book Olga Koch for your event