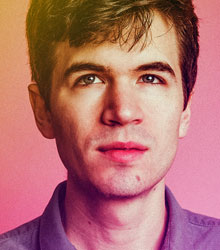 Apologetic Etonian, Ivo Graham, started performing stand-up comedy in 2009 at the age of 18 as an Oxford Graduate, and eight months and later he became the youngest ever winner of the prestigious So You Think You’re Funny award for new acts at the Edinburgh Fringe.

Ivo started boarding school aged seven. His family moved around for his father’s work, which included a three-year stint at a day school in Australia, where he thrived, before returning to England, where he didn’t. The move left him bored and alienated for much of his teen years which, some would say fortuitously, led him on the path towards comedy.

Ivo has become a regular fixture in the clubs and theatres of the UK comedy circuit, with a gauche charm and crafty, self-aware wit which has proved a hit with audiences of all ages, and led to appearances on multiple TV and radio shows including Live At The Apollo, Mock The Week, Live From The BBC and Comedy Central At The Comedy Store.

He is a regular writer on Fighting Talk and The Last Leg as well as several others, and he recently performed at the Melbourne Comedy Festival where he made his Australian television debut and Sydney Comedy Festival.

All of Ivo’s solo stand-up shows have enjoyed sell-out runs at the Edinburgh Fringe Festival and London’s Soho Theatre. As the Evening Standard put it, ‘if you like your comedy with long words and beautiful linguistic flourishes, buy a ticket immediately’.

How to book Ivo Graham for your event