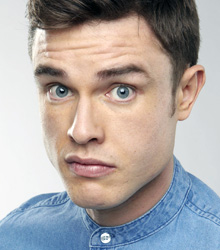 Ed Gamble is a regular on Mock the Week (BBC2) and known for playing the lead role of Georgie Carlton in BBC America’s Almost Royal, a cult US hit show. Following its success in the US, the show was transmitted on E4 and returned for a second series.

Ed Gamble is also one of a handful of British comedians who have performed stand-up on the US TV show Conan (TBS). He has written for Never Mind The Buzzcocks (BBC2) and Ask Rhod Gilbert (BBC1). Ed has appeared on Russell Howard’s Good News as both a solo stand up and alongside Ray Peacock as part of the double-act Peacock & Gamble.

On stage, Ed Gamble toured with his one man show Mammoth, which sold out the entire run at the Edinburgh Fringe Festival in 2017 including extra shows added every weekend. That was his largest nationwide tour to-date, including three nights at Leicester Square Theatre. Ed previously won a Chortle Award in 2014 for Best Compere and has provided national tour support for Greg Davies’ tours in 2017, 2013, and 2012 as well as tour support for Russell Kane and Chris Addison.

For five years Ed Gamble was co-writer and co-host of the iTunes-topping and Chortle Award-nominated Peacock and Gamble Podcast. Peacock & Gamble presented programmes for BBC Radio 4 Extra’s The Comedy Club and starred in Warm Up for BBC Comedy Online. Ed previously co-hosted two shows for Fubar Radio:Peacock & Gamble with Ray Peacock, and The Rock Show with Joel Dommett.

Ed Gamble really worked the stage and hosted so well … My own Director was telling me today how hard he laughed!

Everyone seemed to have a great night, and lots of people commented on how great Ed was!

Was going to drop you a line to say how great Ed was, I got fantastic feedback from all our staff. He really did nail it. He may well have to make a comeback next year – by popular demand!

I wanted to say a huge thank you to Ed. He was fantastic and such a super fit for our audience and evening. Everyone thought he was brilliant and I hope he was enjoying himself as well.

How to book Ed Gamble for your event