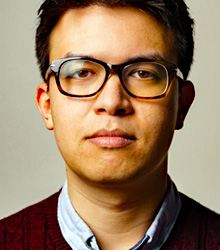 An internationally acclaimed live act, Phil Wang is one of the UK’s most exciting stand-up comedians; having performed four solo stand-up shows as well as international performances at festivals including Montreal Just for Laughs Festival and Melbourne International Comedy Festival.

His critically acclaimed live show, Kinabalu, sold out at the Edinburgh Festival in 2017 and his subsequent national tour was extended into 2018. Previous awards include Chortle Student Comedian of the Year Award and Comedy Central’s Funniest Student Award.

Phil Wang was born in Stoke-on-Trent to an English mother and a Chinese-Malaysian father. He moved to Kota Kinabalu in Malaysia when he was only one week old. Phil grew up in Malaysia, where he was taught in Malay, Mandarin and English. He took GCSEs at boarding school in Brunei and at 16 moved to back to the UK, to Bath in Somerset, his mother’s home city. Phil studied engineering at King's College, Cambridge, where he was also president of the Cambridge Footlights.

Phil Wang’s numerous television appearances include The John Bishop Show(BBC1), Russel Howard’s Stand Up Central (Comedy Central), The Rob Brydon Show (BBC1), Have I Got News for You? (BBC1), Would I Lie to You? (BBC1), Live at the Apollo (BBC1), 8 Out of 10 Cats Does Countdown (Channel4), The Dog Ate My Homework (CBBC) and Insert Name Here (BBC2). He has also acted in the sitcom Top Coppers (BBC3). In January 2018, Phil took part in Comedy Central's 'Roast Battle', hosted by Jimmy Carr, in which he battled friend and fellow comedian Ed Gamble. Wang won the battle.

Phil Wang is one of the UK’s most exciting stand-up comedians and is a great choice for hosting a corporate awards ceremony or performing an after-dinner cabaret set.

Just wanted to say a quick thank you for helping us out this year with Phil, you have been great to work with and very accommodating. Phil was amazing to work with, very kind, understanding, looked great and perfectly handled the night. Please make sure to tell him!

Thanks for your help with organising everything for Phil. The event was a huge success and Phil was great. We really appreciated that he adapted his set so much to fit with the industry.

How to book Phil Wang for your event