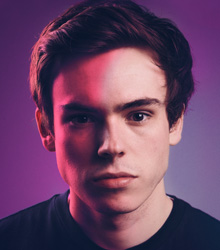 Rhys James is an accomplished comedian, writer and actor. He has already made numerous TV appearances, on shows such as Mock The Week (BBC2), Russell Howard’s Stand Up Central (Comedy Central), Virtually Famous (E4), Sweat the Small Stuff (BBC3), @elevenish (ITV2) and many more.

He has performed five solo shows at the Edinburgh fringe to complete sell-out audiences and critical acclaim, earning his 2017 show ‘Forgives’ a spot in the British Comedy Guide’s ‘Best Reviewed Shows of the Fringe’ list. His own Radio 4 series, ‘Rhys James is…’ debuted in 2018. He is also known for his prolific Twitter feed which has been recommended in The Telegraph, The Sun, Huffington Post, The Poke and The Gentleman’s Journal among others.

Rhys hosts a weekly show on The Football Republic called ‘Top 10 Football F**k Ups’ which garners a weekly audience of well over 150,000 viewers, as well as a weekly segment on BBC2's 'The Premier League Show' called 'Rhys's Pieces'.

He has appeared on Sky’s Soccer AM, Football’s Funniest Moments, BBC1’s Football Focus, BT Sport’s Football Tonight, Absolute Radio’s Rock n Roll Football and TalkSport among others. Rhys is also in demand with many social football channels, writing scripts and featuring in videos for Spencer FC, and frequently appearing as a guest on shows for Goal, Ball Street, Sporf, Bleacher Report and more.

Rhys went down fantastically. He really made it a unique experience by doing his research and making it personal to the audience... Our customers just wished he was on for longer!

He was brilliant. I suspect he has a new band of fans.

Feedback was very good - they loved him! Do thank and congratulate him for me.

We had this feedback from the client: ‘Rhys was brilliant.... funny, great at ad-libbing etc etc. Awards went well.’ So please thank Rhys for doing a great job for us!

How to book Rhys James for your event