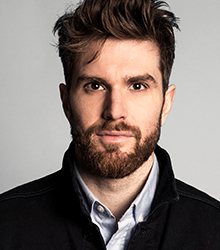 Joel Dommett burst onto the comedy scene in 2007 and quickly established himself as one of the most energetic and exciting comedians in the UK. Originally from Gloucestershire, at the age of 19 he moved to London and soon began a stand-up comedy career that would take him all around the globe.

Joel has become a regular face on TV, from being a finalist in 2017’s I’m a Celebrity, Get Me Out of Here! ITV, Comedy Centrals Joel and Nish vs The World and a panelist on Sky One’s Bring the Noise alongside Nicole Scherzinger, to presenting Live In Chelsea, the live E4 after-show to hit series Made In Chelsea.

Joel boasts a constantly increasing array of TV credits, he has been a team captain on ITV2’s Reality Bites, featured on Drunk History (Comedy Central) and Channel 4’s Comedy Gala (Channel 4). He also co-starred in the hugely successful Impractical Jokers (BBC Three), and has numerous acting credits to his name, including a starring role in his first feature film White Island, E4’s Skins and BBC Two’s Popatron.

2017 was huge for Joel after his highly memorable performance on ITV’s I’m a Celebrity Get Me Out Of Here. He gained thousands of new fans due to his unique brand of humour and his loveable personality while on the show; so many he went onto finish second on the show. After his hugely successful time in the jungle he took over the hosting of ITV2’s spin of show I’m A Celebrity… Extra Camp alongside Scarlett Moffat.

In 2019, alongside touring his live show, Joel Dommett released his first book of memoirs, It’s Not Me It’s Them: Confessions of a hopeless modern romantic. The book details his romantic encounters with 40 women and pursuit for love, before meeting his now wife, Hannah Cooper, and has the running narrative that he is on his first date with her and recalling all the previous women with whom he had a relationships.

The second series of Joel and Nish VS the World aired on Comedy Central in 2020.

Our event was very successful and enjoyed by all. Joel, as host, went down very well with our guests. He was funny and also such a nice genuine guy who was happy for all the selfies!

Clients often ask about purchasing books for giveaways and delegate packs. Below you’ll find a selection of products by Joel Dommett. Click the images to view on Amazon's website. For bulk orders, please speak with your Booking Agent.

How to book Joel Dommett for your event