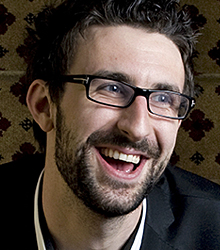 A former Cambridge Footlighter, Mark Watson is a comedian, author and sports pundit. He was born in 1980 and according to life expectancy for his socio-economic group and Body Mass Index, will die in 2056.

He performed his first gig in 2002 and the same year won the Daily Telegraph Open Mic Competition. It was then discontinued, securing Mark as the all-time champion of humour. Also that year he was runner-up in the aggressively titled So You Think You're Funny? After that he stopped doing formal competitions and concentrated on being competitive in general.

In 2004, he published his first novel, Bullet Points. It was Commended in the Commonwealth Writers' Prizes. He has appeared regularly at the Edinburgh Festival Fringe, winning the first ever Panel Prize at the if.comeddies in 2006 and being nominated for Best Newcomer at the 2005 Perrier Comedy Awards.

A year later he won the first ever if.comeddies Panel Prize in recognition of being stupid enough to do a 36-hour show and a show about writing a novel, in addition to main show I'm Worried I'm Starting To Hate Almost Everyone In The World.

In 2007, he recorded his first Radio 4 series, Mark Watson Makes The World Substantially Better, with collaborators Tim Key and Tim Minchin. His third and so far best Edinburgh show Can I Briefly Talk To You About The Point Of Life? sold out every night and he published his second novel, A Light-Hearted Look At Murder. He began the online environmental group Crap At The Environment. He also performed his first 24-hour show in Melbourne.

Mark’s other awards include the Time Out Critic's Choice Award 2006 and a Barry Award nomination for best show at the Melbourne Comedy Festival 2006. In Melbourne, having trained under Al Gore, he performed for the first time his version of Gore's 'Inconvenient Truth' lecture, to an audience of 1500 people.

Mark Watson has made regular appearances on BBC Two's comedy panel show Mock The Week; he has also been a panellist on BBC music quiz show Never Mind The Buzzcocks four times - once as guest captain and once as presenter - in addition to appearing on current affairs panel show Have I Got News for You.

He has appeared on the popular BBC panel show Would I Lie To You? and he also makes regular appearances on panel show-cum debate programme Argumental. He also performed stand up on episode one of Michael McIntyre's Comedy Roadshow, in 2009.

In December 2009, Mark’s television drama A Child's Christmases in Wales starring Ruth Jones was broadcast as part of the Christmas 2009 season on BBC Four; it was described as peeping into the Christmases of a South Wales family during the 1980s.

In 2019, he supported Ricky Gervais on his national arena tour.

Mark was absolutely fantastic once again at the Digital Awards! He got the tone of the event exactly right and we've had really positive feedback from the audience, even more impressive he managed to get through all 30 odd awards within the allocated time so we didn't run over which was great. There is even talk of booking him for a third year in a row!

Mark Watson was fabulous – hilarious and such a nice guy! He went down really well with all the staff and I've had loads of great comments about him. It was lovely that he'd researched our company – the jokes around our marketing/website write-ups were genius and really got us in a fun, festive mood!

AMAZING!!! The best after dinner speaker we have ever booked in my view.

So, firstly Mark Watson is one of the nicest guys I’ve met, very easy to chat to and very relaxed. He was excellent at the awards. He is very funny to start with, but the way he played our audience and adapted to one ‘heckler’ and actually incorporated him in to the show was sheer brilliance! Just say “Northern Ireland” to Mark and he will know what I mean! I would have absolutely no hesitation in recommending him. He is highly professional and an absolute pleasure to deal with.

Mark was perfect – he judged the audience really well and was appreciated by all. Please do pass on our thanks.

Mark was so funny, came across very well and we've had lots of great feedback following on from the gig. Please pass our thanks on to him!

Mark was an absolute pleasure to work with once again and we really do appreciate his and your support on this project.

Clients often ask about purchasing books for giveaways and delegate packs. Below you’ll find a selection of products by Mark Watson. Click the images to view on Amazon's website. For bulk orders, please speak with your Booking Agent.

How to book Mark Watson for your event