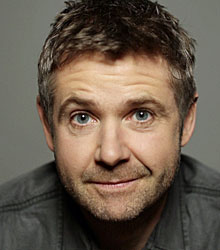 Rob Rouse is one the UK’s best comic storytellers, who works long form narratives into hard-hitting, uncompromising hilarious tales, filled with warmth, vulnerability and a real sense of compassion for our collective human frailties.

Before becoming a comedian Rob was a geography teacher. However, since winning Channel Four's prestigious 'So You Think You're Funny' Competition at the Edinburgh Festival in 1998 (an award previously won by Dylan Moran, Lee Mack, Tommy Tiernan and Peter Kay) he has been a regular performer at major venues on both the London and National comedy circuit.

Rob Rouse has returned to Edinburgh numerous times since. He starred in the first series of the BBC Three sitcom 'Grownups' and 'Guilty Pleasures', a chat show which he hosted. He also had a role (uncredited) in Penelope, a feature film premiered at the Toronto Film Festival in September 2006.

His other acting work includes a role in Tunnel of Love, a prime time comedy-drama for ITV and a starring role in the BBC3 sitcom The Bunk Bed Boys.

Rob Rouse was a member of the cast of The Pilot Show for E4. He is also a popular TV panelist and has made appearances on 8 out of 10 Cats, Celebrity Juice, Comedy Shuffle and Bognor or Bust amongst others.

How to book Rob Rouse for your event