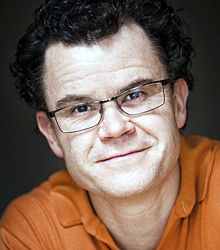 Dominic Holland is one of the country’s most respected and established stand-up comedians. With countless television appearances to his name, including Have I Got News for You, The News Quiz, The Royal Variety Performance and Never Mind the Buzzcocks. He has also written and starred in two hit BBC R4 series The Small World of Dominic Holland (a reference to his 5'6" height).

Dominic’s quick wit and accessible material has allowed him to tour the UK continually and establish him as a firm fixture on the corporate entertainment circuit and is one of the UK’s most in-demand and sought-after corporate awards hosts.

However, these days Dominic Holland is better known as Spiderman’s dad, as he’s the father of actor Tom Holland, who’s played the Marvel superhero since 2016. The trials and tribulations of bringing up an aspiring child actor who, against all odds, goes on to become a globally renown Hollywood actor, now features heavily in Dominic’s hilarious stand up routine.

The Sunday Times described Dominic as ‘a master of observational comedy’ and The Daily Telegraph said, ‘Holland is a top-notch stand up who everyone should see’. He has been described by The Guardian as “A comedian who makes you feel glad to be alive”.

Dominic started performing stand-up comedy way back in 1991, making his debut at The Comedy Café, Rivington Street, London. In 1993 he was briefly managed by Eddie Izzard. In Dominic Holland's first year at the Edinburgh Fringe his one-man show won the Perrier Best Newcomer award and later that same year he supported Eddie Izzard on a national tour.

As comfortable addressing 3000 people for dinner at the Cowes Regatta on the Isle of Wight or an intimate dinner for 60 at a medieval Chateau on Lake Geneva, Dominic Holland is a Perrier Best Newcomer award-winner and Nominee at the Edinburgh fringe, he has performed five individual one man shows and continues to tour the UK and beyond.

When not performing, Dominic is busy writing. He has published novels, a non-fiction book & regularly publishes articles in numerous magazines and newspapers, including The Guardian and ABTA Travel Magazine. He is also a regular panellist on the daytime debate show The Wright Stuff, and was co-writer of Hal, a 2017 sitcom commissioned by BBC Radio 4, that starred fellow comedian Hal Cruttenden, in which Dominic Holland also appeared. He also made regular appearances in the early seasons of BBC Radio 5 Live's comedy sports panel show, Fighting Talk

Dominic Holland is hugely popular on the corporate circuit hosting award ceremonies and presenting after-dinner entertainment with his versatility, professionalism and intelligence earning him an enviable reputation.

Whether he’s hosting your black-tie gala awards night or performing an after dinner comedy set, Dominic’s material is what sets him apart; inoffensive and totally accessible to all, relying heavily on acute observations on all our lives; combined with a very personable stage presence, Dominic makes his shows relaxing, intimate and hugely enjoyable.

Thank you for introducing us to Dominic Holland. We were looking for someone to provide an after dinner session and to host the awards at our annual VIP dinner at the Ricoh Arena and he did the job brilliantly.He was perfect for our event and provided a great mix of comedy which very relevant to the audience. The award presentation was a huge success with Dominic taking complete control of the entire process. He made everyone feel at ease and also introduced just the right amount of humour into the process to build excitement and keep the audience engaged and thoroughly entertained. I was also very impressed with Dominic's professionalism, he was very calm, knew exactly what he was doing and was very understanding of the changing schedule. We were confident from the outset that he would do a good job. In short, everyone had a great time, the event ran very smoothly, I received a lot of very positive comments from our guests and would highly recommend Dominic.

Dominic Holland was a cut above the normal booking. He royally entertained the FBE audience but also was an absolute gentleman and added value around our VIP guests

A very safe pair of hands, Dominic Holland clearly puts time in to understanding the event and the industry to find that perfect balance between relevance and irreverence. Most importantly, he makes people laugh and puts everyone at ease, perfect for our Inaugural Growth Investor Awards

Dom was the perfect host – very funny, irreverent and a consummate professional. He kept the awards moving and the audience laughing. I would highly recommend him

Dominic Holland had the audience in fits of laughter. He made the evening. You know it has gone well when your guests say that it was the “best ever” event because of the comedian. All I have to do now is try to top Dom’s performance at next year’s event. Thanks!

I am getting such good feedback from our guests, we can be a cynical bunch, but you certainly won us over and it makes the organisers life so much less stressful when the celebrity host is so professional.

Fantastic to see a real professional at work. I very much doubt that over three hundred secretaries and administrators of The Royal College of Nursing have ever laughed so much. Thank you for making something so potentially dull, so brilliant.

The Royal College of Nursing.

He just gets corporate events. We have used Dominic on numerous occasions and each time he is superb.

Clients often ask about purchasing books for giveaways and delegate packs. Below you’ll find a selection of products by Dominic Holland. Click the images to view on Amazon's website. For bulk orders, please speak with your Booking Agent.

How to book Dominic Holland for your event